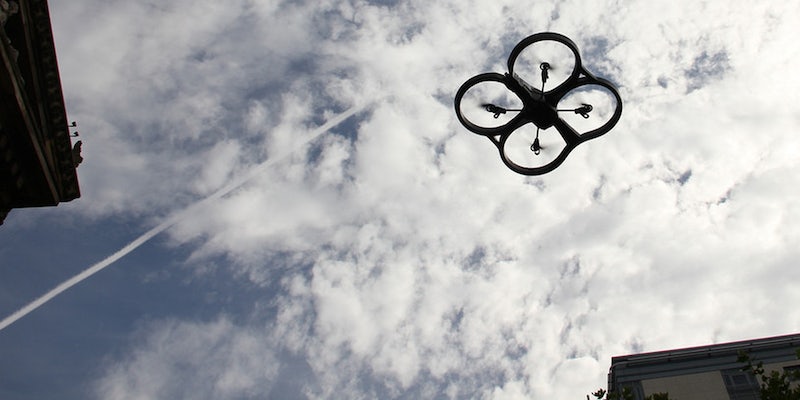 Will the law protect you from being sexually harassed by a drone?

Get ready to get creeped on by flying robots.

In a story recounted on Reddit earlier this week, a female user going by the handle forthelulzaccount told of an unwanted close encounter at the beach.

Forthelulzaccount, who requested to be identified by her Reddit handle rather than her real name, says she was sunbathing on a private, residential beach in the city of Virginia Beach, Va., with her mother when they heard a strange sound overhead. She writes on Reddit:

We heard this whirring noise above us, and I looked up and saw a remote-controlled plane—one of the square ones that can move really articulately in all directions. No big deal. I turned back down and napped more.

Then I noticed: A. It was getting really close to women. Like, straight up in their asses close, flying really low, staying there for probably three minutes at a time; and B. It had a camera on it.

She quickly realized what was happening: The ladies at the beach were being creeped on by a drone. She added in an email to the Daily Dot that the approximately two-foot-by-two-foot drone was clearly making other women at the beach uncomfortable and, at one point, nearly collided with a windsurfer, according to forthelulzaccount.

When the drone came close to her, she briefly considered throwing her water bottle at it and stood up to advanced toward the machine, which immediately backed off, so she knew the operator had to be close by. She looked around and noticed two men standing atop a nearby sand dune, one of them holding a remote. She walked over and saw the pair consisted of a teenage boy controlling the drone, and a man who was presumably the teen’s father.

So I walked up to the older man and said, ‘That is seriously creepy.’

‘You flying around your creep drone is really fucking creepy.’

‘It isn’t going to hurt you.’ He sort of laughed at me now, and I saw red here.

‘I’m not worried about my PERSONAL SAFETY, though I am now worried a bit for YOURS. Your drone is creepy and violating. You need to take it out of the air, or I will.’

Eventually, forthelulzaccount convinced the drone pilots to pack up their gear and leave the beach.

The incident highlighted one of the biggest obstacles faced by advocates of domestic drone use who see the technology’s potential to revolutionize everything from agriculture to taco delivery: The peeping Tom factor.

Forthelulzaccount noted that her experience at the beach led her to the conclusion that camera-equipped drones shouldn’t be allowed in public. ?Unless it’s there for recording a public event, there is no place for that sort of thing,” she says. ?At the least, it is a sound annoyance (the buzzing). At the worst, it is a personal violation.”

Small, unmanned aerial vehicles can be purchased by anyone with a few hundred dollars. And cheap, durable GoPro cameras can be easily affixed to most of them. With the growing ubiquity of camera-equipped drones also comes the question of how to ensure that the privacy and personal space of the people being photographed is suitably protected.

The crux of the problem is that the technology has moved far faster than regulators’ ability to come up with new laws that apply to drones, leaving the country’s patchwork of state and federal drone regulations a confusing mess.

At the most basic level, the Federal Aviation Administration (FAA) has prohibited the use of drones for commercial purposes, while permitting their use by hobbyists who abide by a set of guidelines that include keeping the vehicle within the pilot’s line of sight, not flying near airports, and staying within 400 feet of the ground. These regulations are technically temporary placeholders for a set of more comprehensive guidelines, a long-delayed draft of which is tentatively scheduled to be released later this year.

Since the FAA’s core mission revolves around safety, the agency hasn’t looked too deeply into the privacy implications of increased drone use—although Congress has instructed FAA officials to include privacy concerns as part of its new rule-making process.

As a result, most of relevant legislation on the issue has come from state legislatures. At present, nine states have passed laws limiting drone use on privacy grounds, and four more have similar legislation under consideration. The majority of these laws revolve around restrictions on what information can be collected by law enforcement-operated drones, but there are a couple notable outliers. Idaho and Texas have both imposed bans on hobbyists taking photos with drones and then publishing them—although the Texas law includes loopholes for applications like monitoring oil pipelines and for conducting immigration border surveillance.

When it comes to what forthelulzaccount experienced, however, it seems likely that the operators, while being slimy jerks, weren’t necessarily breaking the law by flying a camera-packing drone close to unsuspecting female beachgoers.

Virginia doesn’t have a law prohibiting non-commercial drone use in public places, which would make this case easier to decipher. The issue is further complicated slightly by forthelulzaccount’s assertion that the beach was private property. But, even so, the law isn’t clear cut.

A 1946 Supreme Court decision ruled that, ?the air above the minimum safe altitude of flight…is a public highway and part of the public domain,” although how that applies to low-flying drones is unclear because the court has yet to seriously address the issue.

Private property rights—and, therefore, rules about trespassing—are a little nebulous when it comes to things that fly. “What [property] rights you have beyond what you can physically touch has always been difficult for the law to grapple with,” aviation lawyer Timothy Ravich told the Atlantic. “Good fences make good neighbors. … But we don’t build fences in the air.”

According to a redditor claiming to be a professional drone pilot, who chimed in on forthelulzaccount’s Reddit thread, had forthelulzaccount actually gone through with her plan to throw a water bottle at her cybernetic harasser, the consequences for her could have been rather serious.

Do be warned though, if one does try to ‘take out a drone’–or any aircraft, for that matter, that is legally operating, the person trying to take it down is susceptible to federal prosecution. I know it sounds strange, but it is an aircraft flying in airspace… so, yeah, someone could get prosecuted bad.

Even so, just because there are no laws specifically targeting drone peeping Toms in most of the country, that doesn’t mean that people are immune from consequences when they make their drones behave badly.

University of Nebraska professor Matt Waite, who runs the school’s Drone Journalism Lab, argues that a lot of the privacy violations that can be carried out using drones are already against the laws that have nothing to do with flying robots.

?Spying on your neighbor while they’re sunbathing in their backyard is already illegal,” Waite noted. ?There are peeping Tom laws on the books in most states; although, in some states, those laws are only enforceable if the peeping Tom is physically present. But those could be changed pretty easily.”

However, navigating the legal system to determine precisely what constitutes harassment seems like a tall order for someone who simply doesn’t want a drone encroaching on their personal space. This discomfort is a likely reason why nearly two-thirds of Americans told Pew Research that allowing more drones to enter the domestic airspace would be a step in the wrong direction. This isn’t a great sign for people like Waite, who see drones as a powerful tool for journalists looking to do things like quickly generate aerial pictures of the destruction caused natural disasters.

For  forthelulzaccount, it comes down to something far more concrete: How drones give another avenue for women to be objectified while out in a public place.

Being looked at is one thing. It is pretty much impossible to avoid that. Anyone with eyes and brain cells can do so. This isn’t what that’s about. It’s about the fact that we were RECORDED without PERMISSION as sexual objects. If this fellow had asked (I would have told him I wasn’t comfortable with it) then that would be different. He wouldn’t be an asshole.

Photo by millstastic/Flickr (CC BY 2.0)