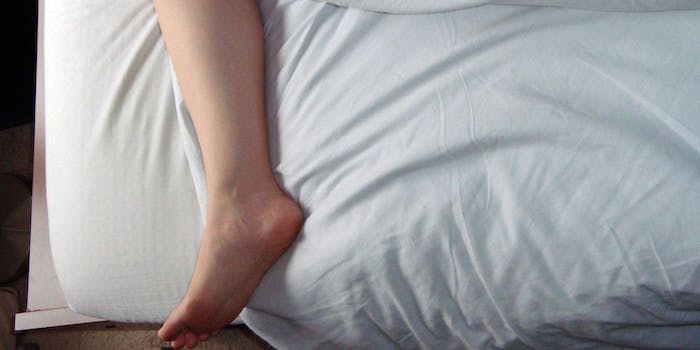 Introducing SexFit, the FitBit for your penis

And they say technology is getting in the way of our sex lives.

While everyone’s been freaking out over wearables like Jawbone and Fitbit, which track your fitness progress and let you share your exercise stats with your friends online, you’ve probably been wondering: How long will it take until someone makes a FitBit for your penis?

As it turns out, not long at all. Allow us to introduce you to the SexFit, a smart sex toy that can best be described as a penile pedometer that tracks your performance during intercourse.

Created by the U.K.-based sex toy company Bondara, SexFit has two basic functions: It’s a standard cock ring that constricts the flow of blood to your member during sex, thus allowing you to maintain an erection for longer, and it’s also a sexual fitness tracker that measures your performance between the sheets, via a free wireless app that connects to the ring via Bluetooth.

You slip the SexFit over the base of your penis prior to intercourse, and set it to “personal trainer vibration mode.” The ring vibrates to a pre-set rhythm, and the wearer’s goal is to match his thrusts to the rhythm of the vibrations “for the most effective stimulation.” (Which seems kind of fascist to me, to be perfectly honest—as a woman, I can attest to the fact that subtle variation, rather than jackrabbit consistency, is almost always preferable during sex—but this is just a prototype, so we’ll let SexFit slide for now… pun intended.)

If you stray from your established rhythm, the ring will light up and deliver a few bursts of vibrations as a warning, so it’s sort of like a judgmental metronome for your penis.

As you’re having sex, the ring records key statistics from your sexual performance, such as thrusts per minute and how many calories you’ve burned during sex. It then transmits these stats to the SexFit app, so after your session is complete and you and your partner are satisfied, you have the option of logging into the app and sharing these details with your friends and loved ones. (“Hey, Grandma! I just slid my hard dick in Jenny 45 times before coming on her chest! Thanks for inviting us to play Farmville, LYL!”)

This creepy social component of SexFit aside, the idea of using technology to track your performance in bed is not totally without appeal, as evidenced by the existence of similar sex-tracking apps like Spreadsheets and Nipple. As humans, we share the basic impulse to quantify and categorize every aspect of our lives. It’s why wearables like Fit and Jawbone have been so successful. It’s why that guy you roomed with in college kept an Excel spreadsheet detailing the frequency and consistency of his bowel movements. And it’s why these sex analysis apps exist: To quantify the most basic and universal, yet arguably the most mysterious, of all human experiences.

And perhaps more important than the question of who would actually use apps like Spreadsheets and SexFit: What self-respecting person would actually sleep with someone who uses these apps?

We’ll find out the answer to this question soon enough: SexFit, while still in the testing stages, will hopefully be released to the general market by spring 2015.