Surveying the brave new world of sex tracking apps, one vagina emoji at a time.

The following story contains sexually explicit material that may be NSFW.

When I was in high school, I kept a list of all the people I’d hooked up with in the back of my academic planner. During AP U.S. History, I’d meticulously rank everyone on a scale of 1 to 10 in various categories—looks, personality, quality of hookup, and, weirdly, “enthusiasm”—then added them up to determine the all-around best-in-show winner. That year, I got an F in Trig, but when it came to doing the math on my sexual exploits I was basically the reincarnation of Pythagoras himself.

As I got older and started having serious relationships, I realized how silly and puerile such lists were, and was so embarrassed that I rarely told anyone about mine. But I was reminded of it recently when I heard about Nipple, a mysterious sex tracking app whose fliers started popping up in Austin during SXSW last weekend.

Hey @nipple_sex, not sure about your ad campaign. It sort of promotes #rapeculture more than the app. Maybe re-think? https://t.co/DGjtXwzhnp

Many attendees at SXSW felt the ads for Nipple—which depict a cartoon woman’s vagina opening a beer, with the slogan “Free beers will increase your chances to have sex, but won’t help you remember it”—were an endorsement of date rape. Others were merely confused about the actual purpose of the app. “I guess they are trying to say, if you put it right up to the woman’s vagina, you will get free, forgettable sex,” Jezebel’s Rebecca Rose wrote in a post on Nipple. “Or beer? I don’t know.”

According to Nipple CEO Matteo Sarzana, the correct answer is neither, nor is the ad a date rape joke: “Is it the case that you have a beer and the girl will get laid with you? No, of course not,” he told me. “It just means that there are certain events, like SXSW, where you may have a lot of sex and then maybe a year later, two years later, you don’t remember having done it. And maybe you want to use Nipple to help you remember.” 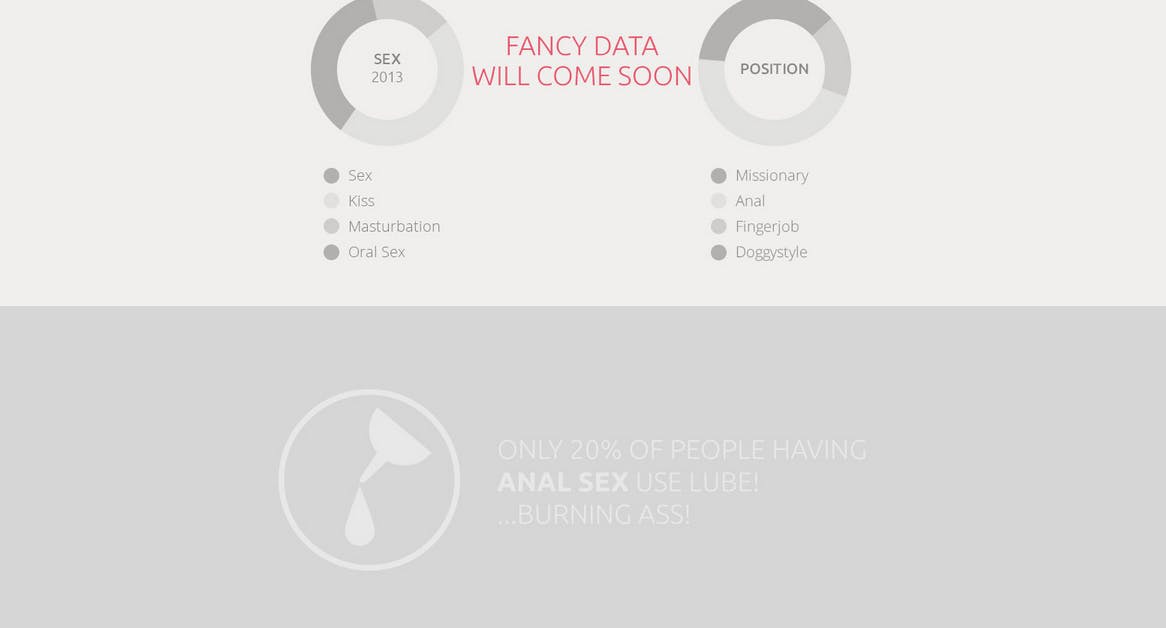 After you log your last sexual experience into the app, Nipple churns out a broken-English, Mad Libs-esque summary on a “calendar” that you can either keep private, or share with other users. If you opt for the latter, you can receive “points” based on the number of sexual encounters you log; the highest-ranking users receive an aptly named “Tiger Woods Award.”

The goal of tracking your sex data, says Sarzana, can be both to improve your own performance and keep a personal record of your own sexual experiences, or a sexual scrapbook of sorts. “People who are in the younger generation, 18-20, have different feelings about sex,” he says. “They’re very open about it and they see it as an important part of their life, as it should be. So we think if there’s an app to track the food you eat, the steps you’ve taken, the places you’ve been, people will use an app that tracks their sex lives.”

In this sense, Nipple is basically an app version of my AP U.S. History day planner, or what Rose refers to as “the Mead composition notebook that so many of us used to scrawl the names of the people we just awkwardly made out with in our dorm rooms.” It’s clearly not that concerned with subtlety, and it’s not overly concerned with political correctness, either, as evidenced by the beer vagina ad and the fact that you’re prompted to fill out a partner’s “race” when you add them to the calendar.

But as someone who isn’t overly concerned about either of those things, and with memories of my high school day planner in mind, I felt compelled to try my hand at Nipple (see what I did there?). After receiving permission from my boyfriend to publicly document our sex life, in exchange for seeing Non-Stop in theaters and not forcing him to go on a family trip to my grandma’s, I was ready to start playing with Nipple (see what I did there: the sequel). 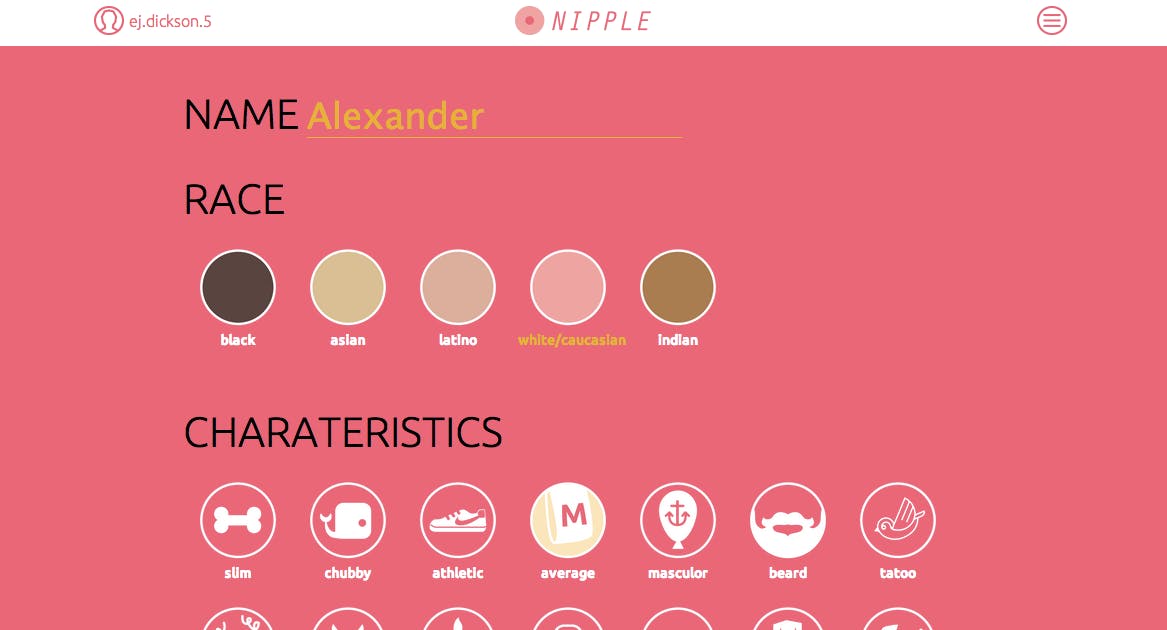 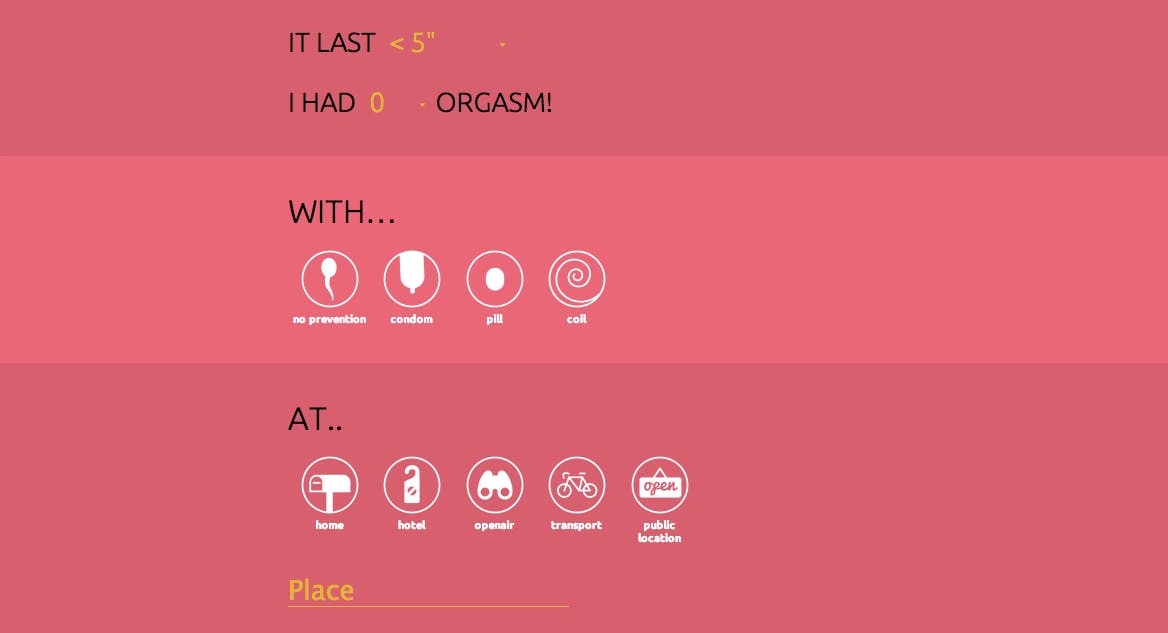 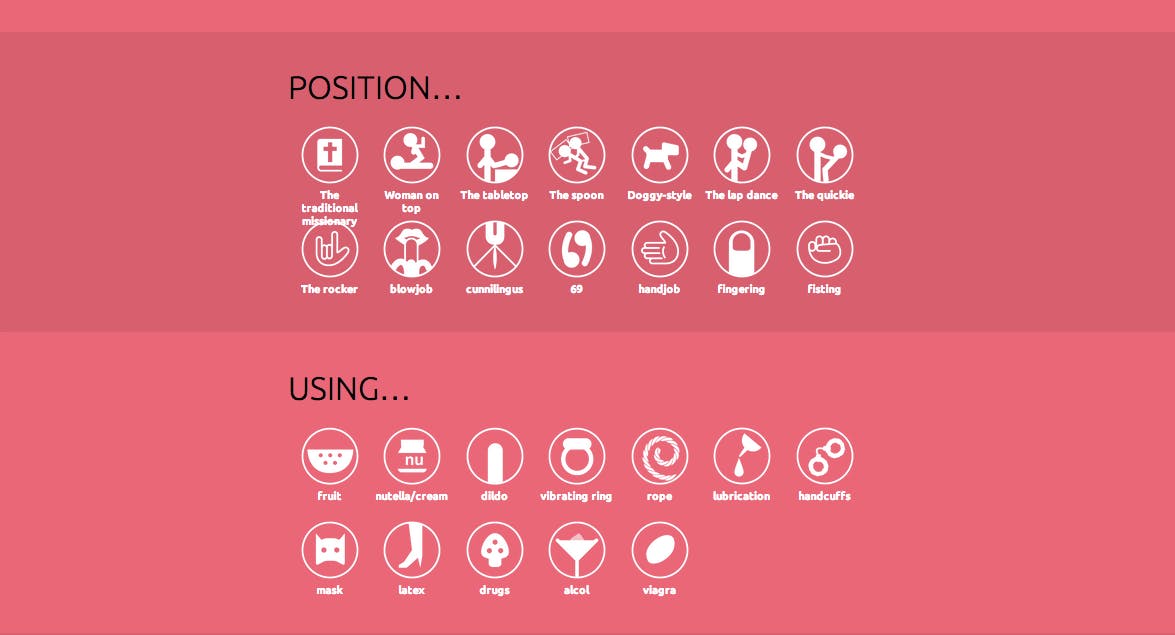 Although I started using Nipple last week, I didn’t add an “experience” (Nipple’s code word for “boinkfest”) to the calendar until a few days ago, because my wisdom teeth had just been extracted and WebMD says you can’t do heavy exercise for at least a week after surgery. At least, that was my excuse to my boyfriend. Really, I was just mad at him for making me see Non-Stop.

Following coitus, I was prompted to enter Alex’s personal details on Nipple, as well as the details of our last encounter, the results of which are below. I’ll refrain from translating, suffice to say that if you have any experience filling out rebus puzzles in Highlights you can figure it out pretty much immediately (also, I’d had some Nutella on toast immediately prior, so for the sake of journalistic accuracy I included it in my “experience”): 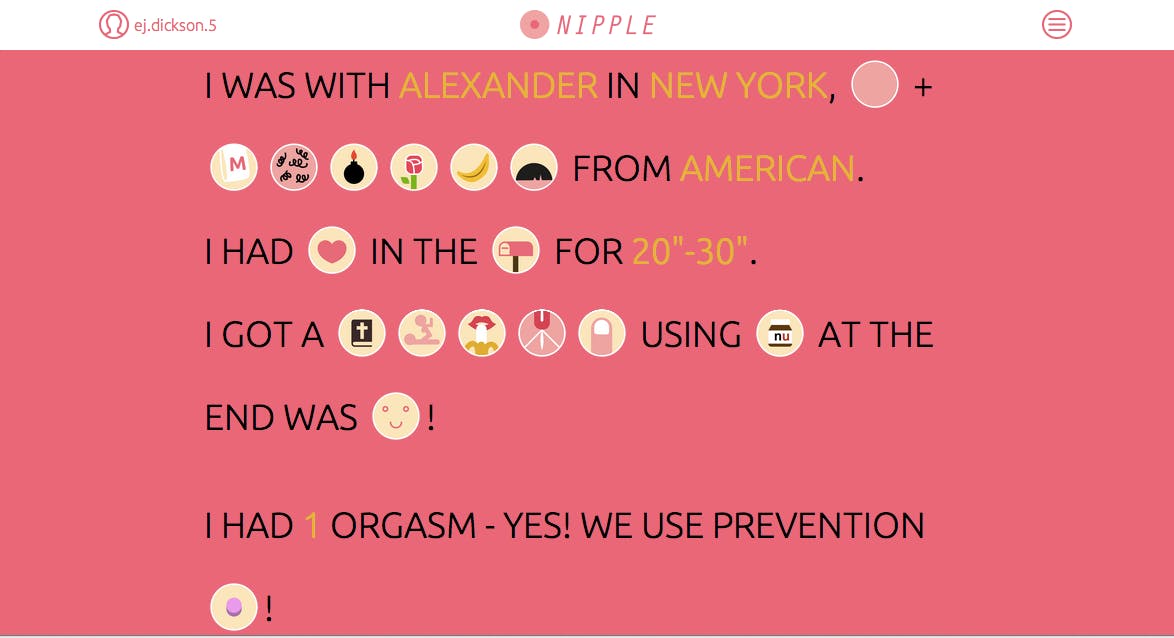 (To my parents, editors, the rabbi who bat mitzvahed me, and my third-grade teacher who told me I would grow up to make a real difference in the world: I’m so sorry you have to see this. And to the rest of you: Now you have to walk around all day with the image of one and one half swarthy Jews going to town on each other in your head. Sorry I’m not sorry. MWAHAHAHAHAHA.)

The features on Nipple are currently fairly limited, so it’s difficult to say how effective the app is as a social sharing platform (though Sarzana says he eventually plans to aggregate the data to make a map of global sexual behaviors). But what I realized from a week of using Nipple is that tracking one’s sex life is actually really, really fun. There was something weirdly edifying about seeing my sexual routine—the old standbys we came back to over and over again, the new positions that worked and the ones that didn’t—spelled out in X-rated pink emoji.

Although to a certain extent, I knew these things already, seeing it laid out in broken-English Mad Lib form somehow made it more concrete. And while Nipple currently doesn’t allow you to see other users’ data, I could totally see the voyeuristic appeal of perusing other users’ sexual experiences as well.

So does the world actually need a sex-tracking app, especially one as pink and outrageous and politically incorrect as Nipple? The sober, rational, grown-up part of me says no, but the part of me that still thinks of sex as a novelty, the part that’s 16-years-old and writing down my latest conquests in the back of a day planner, says yes. Because like Nipple, and like the act of ranking itself, most good sex is goofy and puerile and ridiculous and un-P.C., but it’s also really, really fun. When we think of sex that way, maybe an app like Nipple is just what we need.