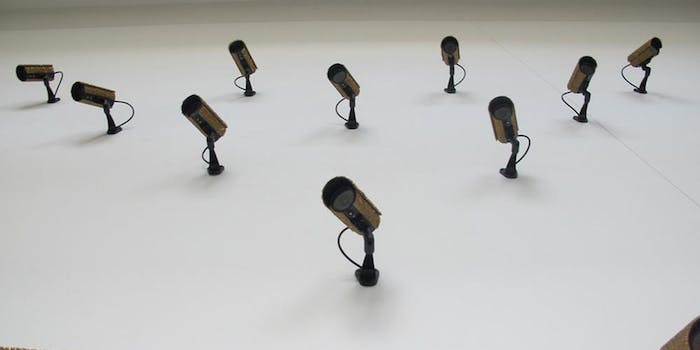 With these installations, the Web’s sex cams are transformed into high art

Modigliani meets My Free Cams with these multimedia artists' installations, which explore the intersection between intimacy and technology.

With the rise of webcamming, interactive porn and other forms of virtual peep show, it’s never been easier to tap into your inner voyeur and get a glimpse at people’s most intimate online moments. Not all of these are even sexual: Some of the most quietly thrilling voyeuristic moments during a cam show are when a performer’s cat enters into the frame, or when she gets a text and her ringtone is from Fiddler on the Roof. Thanks to technology, we’re not only able to get a glimpse into people’s sex lives: We’re able to glimpse every aspect of their humanity.

Multimedia artists Pablo Garcia and Addie Wagenknecht know the appeal of seeing what people are like behind closed doors. They’ve tapped into our voyeuristic impulses with their collaborations, which focus on taking “these weirdly intimate zones of the Web and making them public,” as Motherboard writes.

An architect and digital artist, respectively, Garcia and Wagenknecht are primarily interested in exploring the intersection between human intimacy and technology in various forms, as seen in Wagenknecht’s current installation, Loves Lies, a sexed-up commentary on NSA surveillance that features a cluster of surveillance cameras embedded with Swarovski crystals.

Last year, the two collaborated on Webcam Venus (NSFW), a video project that superimposes classic works of art, like Modigliani nudes, with frames from pornographic webcam shows. They also worked together on brbxoxo, a website that compiles cam feeds when the performers are not in their rooms. The result is a haunting meditation on intimacy, absence, and the quiet thrill of peeking into the life of a total stranger—even if that stranger isn’t actually present.

The purpose of their work, the artists say, is to demonstrate the enormous role technology plays during the most private, deeply intimate moments of our lives—and vice versa. “We’re leveraging this hidden potential for creative inquiry in places that would be considered deep and dark and sexualized in some instances,” Wagenknecht recently told Motherboard. “For me, a lot of the artworks that we’ve been doing are kind of comments on, like, the digital versus the real… is there even a difference anymore?”