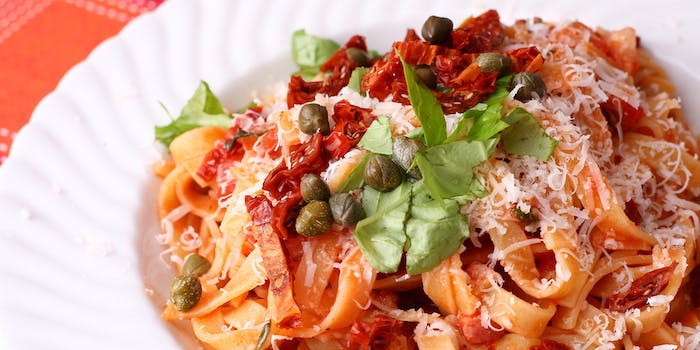 With the press of a button, dinner is made.

Imagine waking up in the morning and having an omelet perfectly prepared for you, or coming home after work to a lamb sauté. This is the life Sereneti Kitchen wants to give people.

The startup created a device that can make meals at the touch of a button. It sits in the corner of your kitchen, connected to a mobile application, and creates multiple-ingredient meals when you want them.

Sereneti’s Cooki machine was presented on-stage at Highway1‘s demo day, the culmination of a months-long accelerator program that helps launch hardware products to the masses.

Four trays sit at the back of the machine, each containing a different ingredient. The app will describe which tray should contain which ingredient, and a mechanical scoop will put the ingredients into the pot when ready to cook. The app will come with a number of recipes.

The team describes Cooki as “Keurig, but for food.”

“It will deliver [the food] at the proper time, stir it the proper way, and this can all be programmed to exactly how the chef who submitted it would do,” Corrigan Nolan, mechanical engineer for Sereniti, told the Daily Dot.

A motorized robotic arm will mix each ingredient into the pot at the correct time. Additionally, Sereneti plans to make it easy for people to order ingredients for recipes on-demand, similar to food delivery services like Blue Apron, but created specifically for Cooki. For recipes that require ingredients to stay cold before serving—like meat or vegetables—Cooki will have an internal refrigeration that monitors the temperature to keep food fresh. 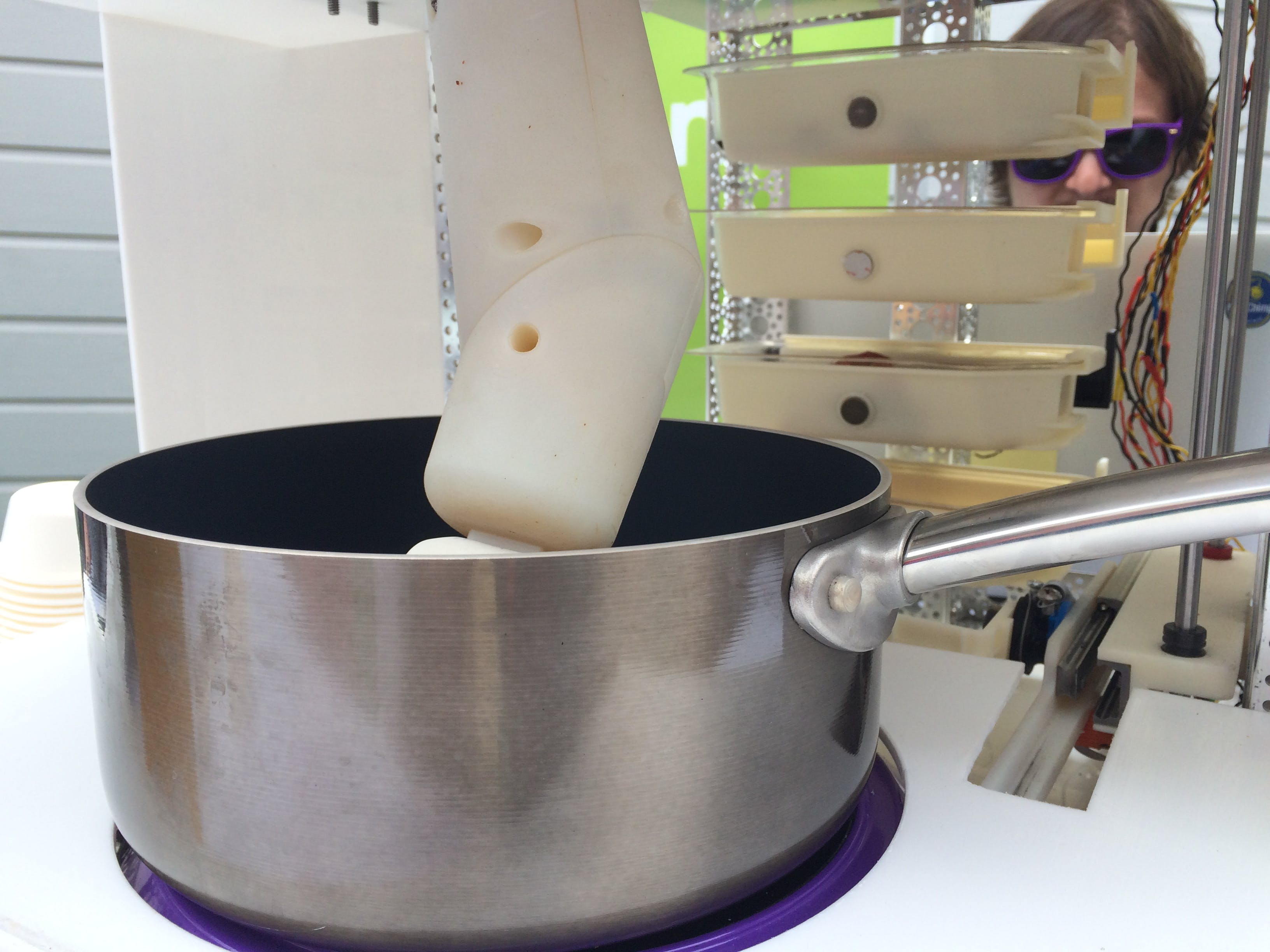 Cooki is still a prototype. To show me how the product works, Nolan removed the acrylic panels outside the machine that keep the wires hidden to display a metal skeleton holding the components together. The four trays trays and mixing gear attached to a robotic arm are 3D-printed components. 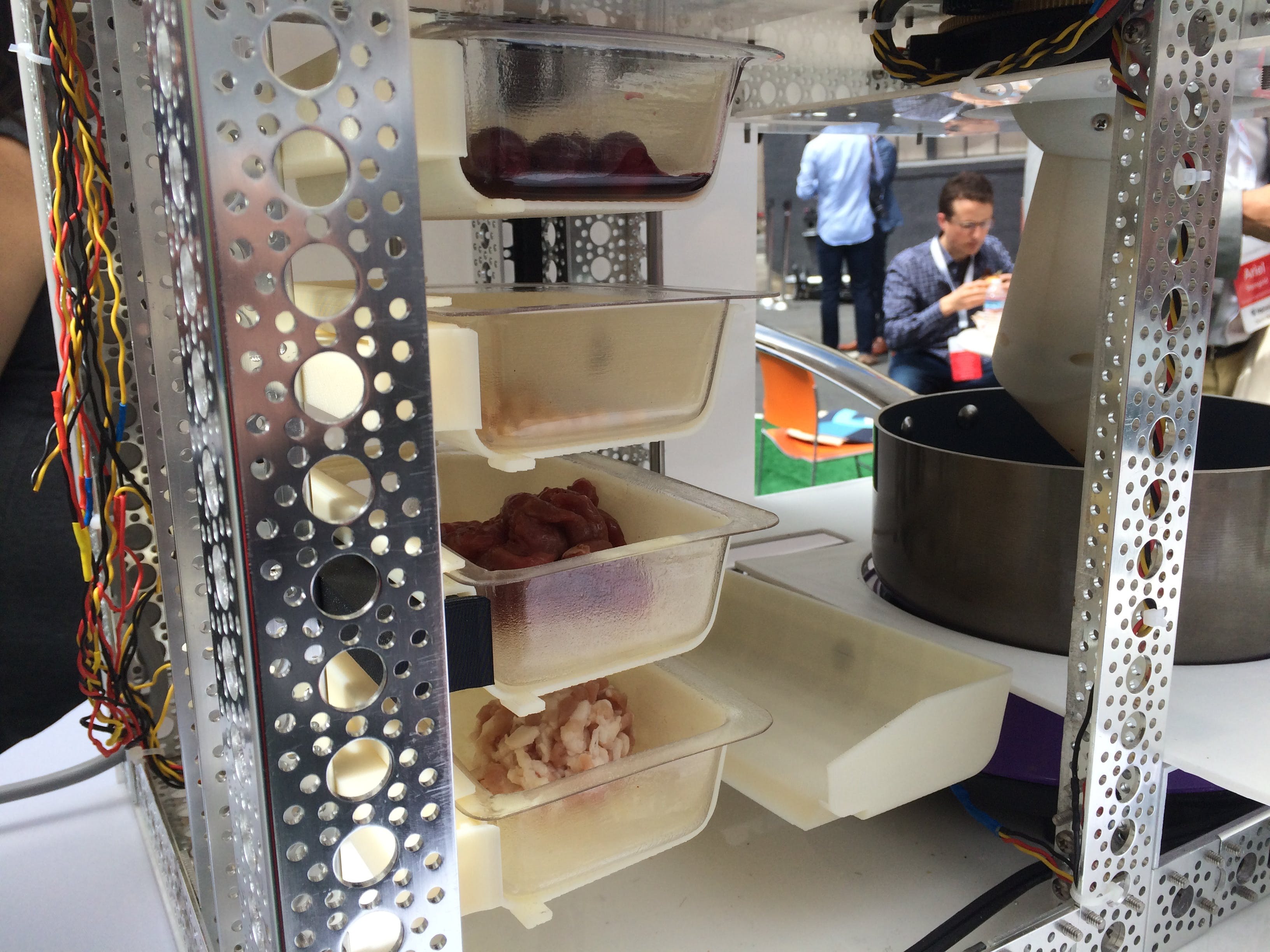 Sereneti is the latest in a handful of products that want to make cooking healthy, complete meals much easier. Sous-vide machines, already widely used to get dinner ready at specific times, are becoming smarter, too. Mellow, for instance, is a sleek and slender Wi-Fi-enabled machine that can cook almost anything submerged in water as long as you schedule it through an app.

Though it’s not ready for mass consumption yet, Sereneti is moving quickly to make it available for everyone at $499 by next year. You can sign up on the company’s website to get notified when the product is ready to be in your kitchen.

Photo via diekatrin/Flickr (CC BY SA 2.0)