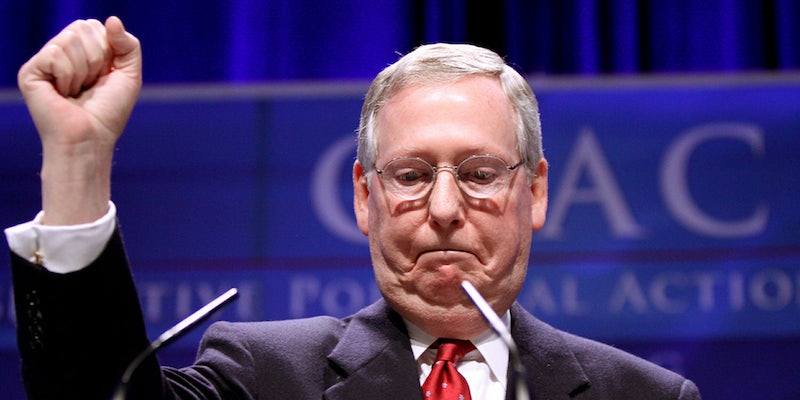 There was a lot of drama in the Senate yesterday.

The Senate on Tuesday night handily voted down the Republican-led effort to repeal and replace the Affordable Care Act amid its ongoing debate over the future of healthcare in America.

The final vote on the Better Care Reconciliation Act (BCRA) was 43 to 57—well short of the needed 60 votes to overcome a parliamentary objection.

The late-night vote puts the future of the Republican healthcare bill in a state of flux, as its unclear how exactly their seven-year effort to overhaul the (now popular) health care law will proceed.

While debate will proceed on health care this week, Senate Republicans have yet to agree on a bill that would repeal and replace the Affordable Care Act.

On Tuesday afternoon, drama seeped in the Capitol as Sen. John McCain, who announced he was diagnosed with brain cancer last week, returned to cast his vote in favor of moving forward with debate on the healthcare law and hundreds of protesters interrupted the vote by chanting “kill the bill, don’t kill us,” forcing the sergeant at arms to restore order in the Senate chambers.

Today Senators are expected to vote on a repeal-only proposal, according to CNN, which is expected to also be defeated because several Republicans and all Democrats have said they are not in favor of repealing the law without a replacement. Were lawmakers to repeal Obamacare without a replacement, as many as 32 million fewer Americans could have health insurance, according to the Congressional Budget Office.

The House passed its version of a healthcare bill, the American Health Care Act, earlier this summer by a 217 to 213 vote. Any legislation that passes the Senate would first need passage in the House before heading to President Donald Trump‘s deks.