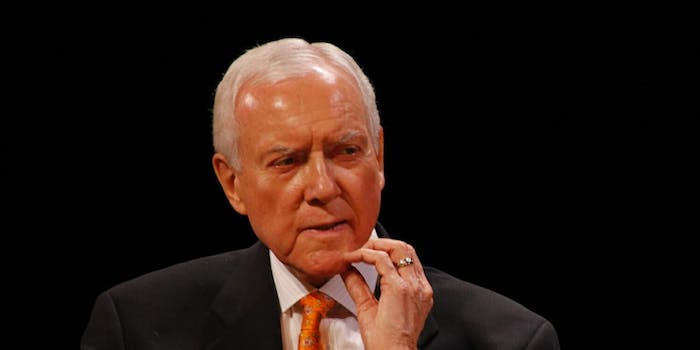 Senator Orrin Hatch (R-Utah) is facing tremendous backlash after comments he made Monday, suggesting that even if allegations of attempted rape against Supreme Court nominee Brett Kavanaugh are “true,” senators should “consider who the judge is today.”

Hatch, who sits on the Judiciary Committee, was speaking to Bloomberg reporter at the time at the Capitol when he was asked about the allegations made by Kavanagh’s accuser Christine Blasey Ford.

Senator Orrin Hatch was asked how he thought senators would react if it turns out that what Kavanaugh's accuser has alleged is true.

“If that were true, I think it would be hard for senators not to consider who he is today,'' he said.

Later that day, Hatch made further moves to defend Kavanagh and discredit Ford in comments made to reporters. He claimed that he had made a phone call to the nominee, in order to clarify the details surrounding the alleged incident, said to have occurred in 1982.

Reciting Kavanagh’s position, that he was not at the party at which the sexual misconduct is said to have taken place, Hatch suggested that Ford was “mixed up” and repeated his admiration for Kavanagh.

“All I know is that he’s a very smart guy. A good guy. He has an excellent reputation,” the senator said.

Orrin Hatch suggests that even if Kavanaugh attempted to rape someone, it shouldn't impact his ability to serve on the United States Supreme Court. https://t.co/HdWXfvkk9F

Orrin Hatch’s “she must be confused” comment lays bare the bottom-line reality here: there is NO WAY for the GOP to stick w/Kav w/out exposing their mysogyny & infuriating women EVERYWHERE. There is no “just let them testify.” It will be a media circus right before the election

If ANYONE is "mixed-up" it would be Senator Orrin Hatch! pic.twitter.com/8alxYnluDJ

Other critics made a notable comparison to the similar position that Hatch took on Anita Hill—who accused 1991 Supreme Court nominee Clarence Thomas of sexual harassment. At the time Hatch had gone so far as to accuse Hill of basing her accusations on the movie The Exorcist.

"There are a lot of things that just don't make sense to me about Anita Hill's testimony. Some of it just doesn't square with what I think is basic reality and common sense" — Orrin Hatch, October 1991

Senator Orrin Hatch, one of the lead "torturers" of Anita Hill, cited "The Exorcist" regarding her testimony. Now he says that Christine Blasey Ford is "mixed up" BEFORE she ever testifies. Once again, the GOP can't bring itself to trust women.

TBT to that time Orrin Hatch (who is, yes, still on the Senate Judiciary Committee) suggested that Anita Hill's allegations against Clarence Thomas were based on "The Exorcist" pic.twitter.com/FqznIDp7wP

In fact, in a 2010 interview with CNN, Hatch made strikingly similar remarks on Hill, who he said was “outed” by “feminist women” and that she had “talked herself into believing” Thomas was her harasser.

It appears Hatch has a history of not only outright dismissing accusers of Republicans but smearing these women as delusional. In the #MeToo era, thankfully, no one will let him get away with it.