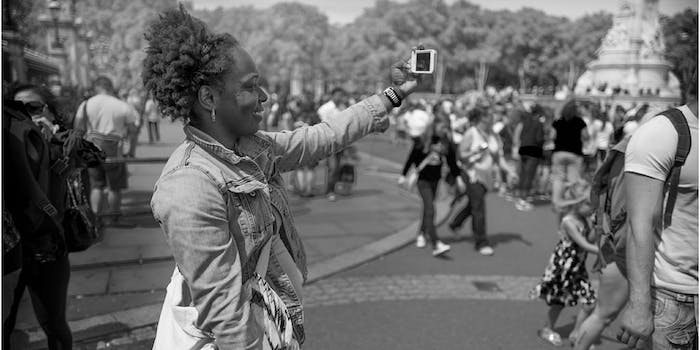 Selfies are having their HDTV moment.

Apple’s new crop of shiny phones will be available this week and the iPhone 6S family has a few new features worth getting excited about. One people haven’t discussed much: a vastly improved front-facing camera that will make your selfies look way better.

The iPhone 6S and iPhone 6S Plus come with a 5-megapixel front-facing camera, meaning any photos taken with the FaceTime HD camera will look crisper and clearer, thanks to an upgrade from the 1.2MP camera in the iPhone 6. The FaceTime HD camera also has the Retina flash, with a preflash that analyzes the lighting around you and a “True Tone” flash to match the ambient lighting. Apple says it will give photos “more true-to-life colors and more natural-looking skin tones.”

And all those sweet new selfies will wind up in their very own photos folder, which Apple conveniently added in iOS 9 to collect and store photos taken with the front-facing camera.

While the 5MP FaceTime camera is a huge jump for Apple, it’s not the first high-resolution front-facing shooter on the market. The Samsung Galaxy Note 5 and Galaxy S6S already have the same front-facing specs, while next Google’s Nexus device, to be launched later this month, is expected to have an 8-megapixel selfie camera.

But as phone specs begin to improve and selfies become even more lifelike, it could change the way people capture them in the first place. Try as we might, selfies are rarely perfect. They’re attempts that we make over and over to get just the right lighting and as little grain as possible, while the lower resolution eliminates more flaws that we would normally see with higher resolution cameras. We usually don’t shoot selfies for artistic relevance, but rather to capture a brief moment with friends or in the bathroom while we’re “feeling our look.” Now that selfie cameras are improving, the selfie stereotype might soon change, too.

When high definition video launched, it exposed the flaws in people on television, forcing makeup artists to learn how to manipulate concealer and powder in an effort to produce a more natural look on celebrities who appeared in film or photos taken with HD cameras.

You might remember the 30 Rock episode in which Liz Lemon went on screen in front of the HD camera, parodying the technology that highlighted every single dimple, wrinkle, and flaw in her face.

Improved selfie cameras are mobile devices’ HDTV moment. Apple says its new phones can “take a sel?e worthy of a self?portrait.” So say goodbye to those grainy bathroom selfies—if you’re picking up the iPhone 6S, your selfies might start looking a bit more real.