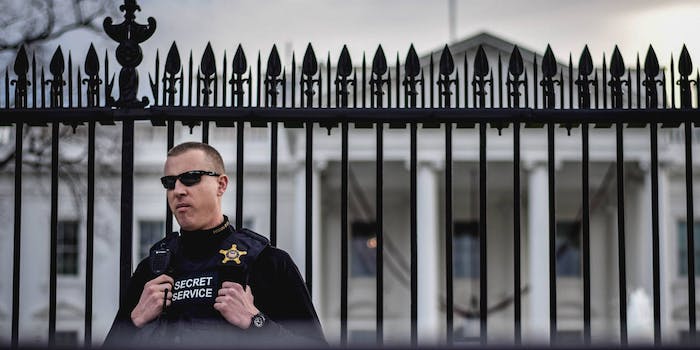 The New Hampshire state representative called for Clinton to be 'shot' on a right-wing radio show.

The United States Secret Service is looking into statements issued by an adviser to the Donald Trump campaign calling for Hillary Clinton to be “shot” over her handling of classified material.

Al Baldasaro, who has advised Trump on veterans issues and has spoken at Trump campaign events, called for the Democratic presidential candidate’s execution during an interview on the Jeff Kuhner Show, as reported first by BuzzFeed. On the subject of the 2012 attack at the American embassy in Benghazi, Libya, Baldasaro said Clinton “should be put in the firing line and shot for treason.”

“Anyone that commits treason should be shot.”

Speaking with Kuhner, Baldasaro, who is also a state representative in New Hampshire, referred to Clinton as a “piece of garbage.”

A Boston-based WRKO radio host, Kuhner is a self-described “conservative nationalist” who often refers to himself as “Liberalism’s Worst Nightmare.” WRKO, an ABC News affiliate, is broadcasting live this week from the Republican National Convention.

During a subsequent interview with the Daily Beast, Baldasaro doubled down on his call to kill Clinton, telling a reporter, “Anyone that commits treason should be shot.” Added Baldasaro: “I believe Hillary Clinton committed treason. She put people in danger. When people take confidential material off a server, you’re sharing information with the enemy. That’s treason.”

The Secret Service told the Daily Dot on Wednesday it was aware of Baldasaro’s remarks and would “conduct the appropriate investigation.”

Earlier this month, the Justice Department declined to charge Clinton for the way she and her staff handled classified information through private email servers. FBI director James Comey told Congress that investigators found no “clear evidence” Clinton intended to violate laws governing the handling of classified information, though he rebuked the former State Department staff for acting in an “extremely careless” manner.

Trump campaign spokesperson Hope Hicks told NH1 News that Baldasaro “doesn’t speak for the campaign,” but she also said, “We’re incredibly grateful for his support, but we don’t agree with his comments.”

NH1 reported that Baldasaro has been asked to apology by the chair of the New Hampshire GOP, Jennifer Horn, who said his “calls for violence” were “appalling” and had “no place in public discourse.”