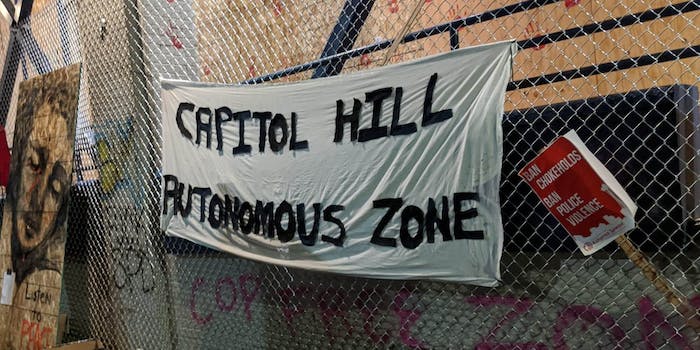 Several blocks of the Capitol Hill neighborhood have been taken over by protesters.

The “autonomous zone” set up by protesters in Seattle’s Capitol Hill district has released a list of demands.

In a blog post on Medium published Tuesday, the protesters—which overtook and barricaded several city blocks on Monday—outlined the necessary “policy changes for the cultural and historic advancement of the City of Seattle.”

A reporter for KIRO, a local radio station, described the zone as “very peaceful” with demonstrators giving out free food and medical aid.

Representing the views of the “Collective Black Voices” from what has been dubbed Free Capitol Hill, the demands focus on issues like the justice system, economics, education, and health and human services.

In regards to the justice system, the group is demanding the outright abolition of both the Seattle Police Department as well as the court system.

“This means 100% of funding, including existing pensions for Seattle Police,” the post reads. “At an equal level of priority we also demand that the city disallow the operations of ICE in the city of Seattle.”

The protesters are also demanding that prior to their abolition, all police must be barred from using firearms, batons, riot shields, and chemical agents.

The post goes on to call for “imprisonment” to be phased out entirely, and for those arrested for marijuana and resisting arrest offenses to be released immediately.

The protesters argue that all funding previously used for Seattle police should be redirected to socialized medicine, public housing and education, and naturalization services for undocumented immigrants.

In terms of economics, the post calls for “de-gentrification of Seattle” through methods such as rent control, free college, and a “decentralized election process” that allows working-class residents to run for office.

Changes to the health and human services listed in the demands include hospitals hiring Black nurses and doctors to specifically aid Black patients, and having a staff of mental health experts to respond to 911 calls.

Demands regarding education include mandatory anti-bias training for all educators, a greater focus on Black and Native American history, and the removal of any Confederate statues throughout the state.

The demands come not long after the Seattle Police Department’s East Precinct was more or less abandoned, allowing protesters to claim the surrounding area as their own.