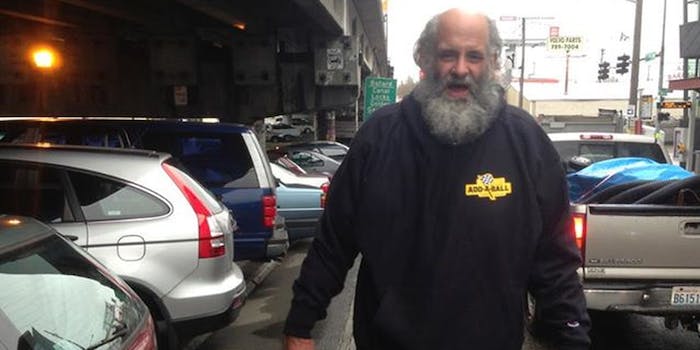 This man is turning homeless people into walking billboards

"Hoodies for Hobos" is capitalism at its foulest.

Let it be known that 2014 was the year in which a “faintly amusing satire of Reaganomics” became an “actionable business plan.” Because Brad Johnsen, owner of the Add-a-Ball Amusements Bar & Arcade in Seattle, is turning homeless people into walking billboards.

Actually, Johnsen’s idea of covering the less fortunate in swag that bears the name and logo of his business—“Hoodies for Hobos,” he calls it—is just the latest in a string of controversial schemes to monetize people’s itinerant misery.

“Bumvertising,” for example, has been around since 2005, while turning the homeless into Wi-Fi hotspots at SXSW in 2012 proved, for New York ad agency BBH Labs, that there is such a thing as bad publicity.

“I kick it with bums all the time,” Johnsen said in an interview with Vocativ. “My whole thing is that they just want to get drunk and high like the rest of us. But sometimes they smell funky and downright nasty.” To that end, he’s putting all profits from sweatshirt and T-shirt sales toward outfitting Seattle’s street people “with some fresh gear,” promising to “post a pic of every new bum we spruce up.” Of the 30 individuals he claims to have clothed, however, just a handful appear on Add-a-Ball’s official Facebook page.

“I’ve done well. I got a Rolex and a Miata,” Johnsen also happened to remark. “Doing this makes me feel better. If it also encourages people to go play pinball and get drunk—all the better.” But supposed philanthropy aside, does he worry about political incorrectness? “I mean, I call my cat the N-word when nobody is around. I welcome the criticism.”

The fact is, you can complain about how this marketing ploy dehumanizes the homeless or helps us to ignore the societal problems they signal until you’re blue in the face. But when you get right down to it, this whole thing makes it look like people who drink or play video games at Add-a-Ball inevitably end up kicked to the curb, starving and destitute. If that’s the sort of branding Johnsen’s after, I’d say he’s welcome to it.