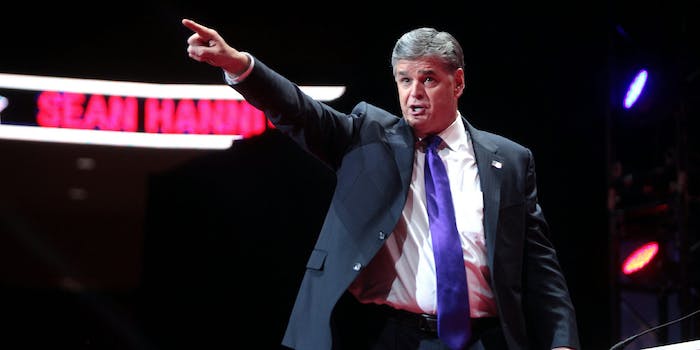 Seven advertisers have pulled out of airing during Hannity's program.

A growing number of advertisers have pulled advertising from right-wing pundit Sean Hannity’s Fox News program as he continues to push a conspiracy theory about the death of Seth Rich, a Democratic National Committee staffer who was killed last year while walking home from a bar in Washington, D.C.

Hannity has dug in on the refuted conspiracy that Rich was killed by Democratic operatives after leaking emails from the DNC to WikiLeaks. Both claims have not been substantiated and police have said his death was the result of a robbery gone wrong.

Despite this, Hannity has pushed reporting on the conspiracy—and advertisers are pulling their funding as a result.

Cars.com, Casper, Crowne Plaza Hotels, Ring, Peloton, Leesa Sleep, and USSA have all announced they are no longer advertising on Hannity in light of the pundit’s continued push into the conspiracy.

In a statement to BuzzFeed News, Cars.com said the decision to pull adverting was made “recently.”

“Cars.com’s media buy strategies are designed to reach as many consumers as possible across a wide spectrum of media channels. The fact that we advertise on a particular program doesn’t mean that we agree or disagree, or support or oppose, the content. We don’t have the ability to influence content at the time we make our advertising purchase. In this case, we’ve been watching closely and have recently made the decision to pull our advertising from Hannity.”

Despite Fox News retracting an article that perpetuated the conspiracy theory, Hannity doubled down, telling listeners on his radio show that he “retracted nothing.”

Hannity said during a recent broadcast that he would stop reporting on the story “for now” out of respect for the family; however, he seemed to indicate he would continue in the future by tweeting that he was “closer to the truth than ever.”

Rich, 27, was gunned down on July 10, 2016. Shortly after his death, WikiLeaks published emails from the DNC and offered a monetary reward for information about Rich’s death. Those in support of the conspiracy theory point to those instances as evidence he was killed in connection with the release of the emails.

The left-leaning media website Media Matters recently published a list of Hannity’s advertisers as activists moved to punish the host for promoting the Rich conspiracy theory by lowering his value to the cable network. Former Fox News powerhouse Billy O’Reilly was let go from the company amid sexual harassment allegations and a flood of advertisers pulling out from the show.