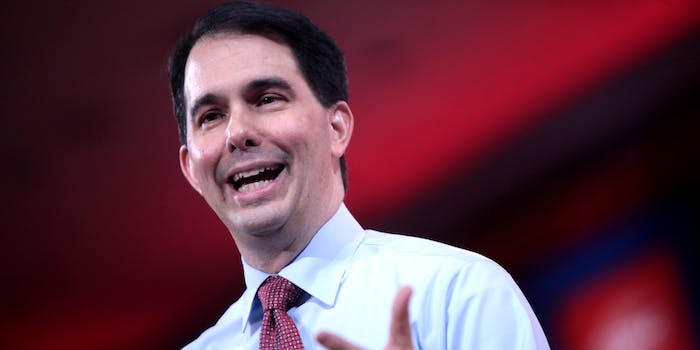 Is it enough to beat Donald Trump?

Trump currently holds a slim 1.7-point lead over Cruz in Wisconsin. Walker’s endorsement could push Cruz over the edge when voters cast their ballots on Tuesday, April 5.

After the failed Obama-Clinton Admin, Americans want leadership. I endorse @TedCruz, a principled constitutional conservative who can win.

Like we did in WI, @TedCruz isn’t afraid to stand up to big govt special interests. He understands that power belongs to states, not Wash DC

.@TedCruz is the best-positioned candidate to both win the Republican nomination and defeat Hillary Clinton. I’m proud to stand with him.

Wisconsin is key to the Republican establishment’s efforts to knock Trump out of the frontrunner position, with party leaders reportedly planning a 100-day campaign to prevent him from reaching the 1,237 delegates needed to secure the nomination at the party’s convention in July.

Soon after Walker announced his endorsement of Cruz, Trump tweeted that he remains ahead of Cruz and Ohio Gov. John Kasich in both votes and delegates.

I have millions more votes/hundreds more dels than Cruz or Kasich, and yet am not being treated properly by the Republican Party or the RNC.

Walker ended his own presidential bid in September after dropping in the polls while Trump continued his rise. In his exit speech, he said that he hoped to “clear the field … so that a positive conservative message can rise to the top of the field.”

Club for Growth, a conservative political organization that helped derail a 2015 criminal investigation into the Walker campaign, is spending more than $1 million on anti-Trump campaign ads ahead of the Wisconsin primary. Our Principles PAC, a group founded solely to topple Trump, has also spent more than $800,000 in Wisconsin on ads designed to unseat him.

Walker remains a controversial leader in Wisconsin. He survived a 2012 recall election in the state after a heated fight with organized labor, but only 39 percent of Wisconsinites approve of his performance as governor, according to a February poll from Marquette Law School.

In addition to anti-Trump efforts by Republican leaders and outside groups, Trump faces challenges from within his own campaign. On Tuesday, Police in Jupiter, Florida, charged his campaign manager with battery for grabbing a Breitbart reporter by the arm during an event.