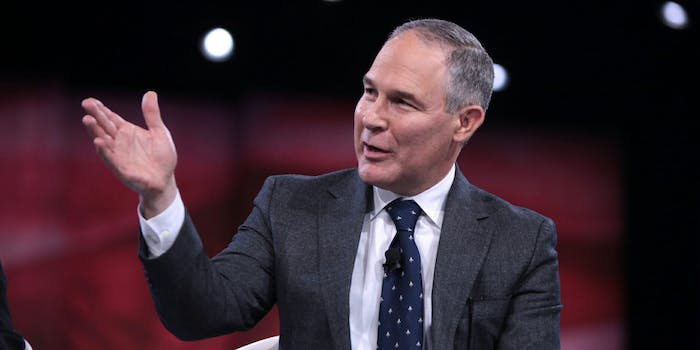 The morning talk show is a favorite of Donald Trump.

Former Environmental Protection Agency (EPA) Administrator Scott Pruitt‘s team approved part of the script for a spot on Fox & Friends in May 2017, according to a new report.

The Daily Beast reports a public record request showed emails between Fox & Friends—Fox News‘s morning talk show that has been a favorite of President Donald Trump—and Pruitt’s team, where they approved part of the show’s script for an interview with the now-former administrator.

As the news outlet points out, it is common for producers to discuss topics and have pre-interview questions with interviewees, but having a public official’s office approve scripts of shows is against journalistic norms.

The script that was approved by Pruitt’s office was quite flattering to the new EPA chief. The script said the EPA would be going in a “new direction” and blasted former President Barack Obama‘s administration for leaving behind a “huge mess.”

When a Fox & Friends producer asked if the script would “be ok as the set up” to the segment, the EPA chief’s office responded that it was “perfect.”

Pruitt resigned from the EPA earlier this year. Fox News told the Daily Beast the emails were “not standard practice” and that it would be addressed internally.