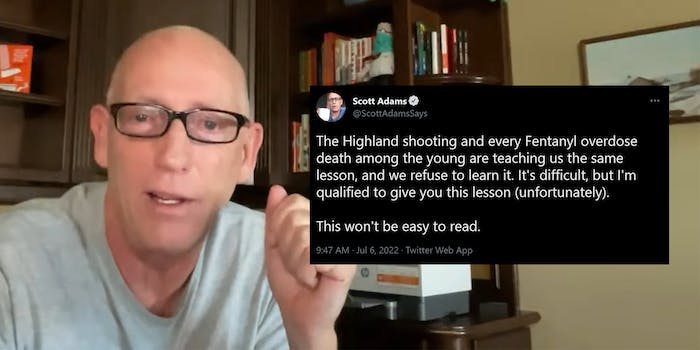 Adams said he 'chose' to watch his stepson die.

Scott Adams compared mass shootings to overdosing on drugs in a lengthy thread about his stepson’s death and the Highland Park slayings.

The massacre reinvigorated debate about why the United States has so many mass shootings and what to do about it. The issue largely divides people along partisan lines, with many conservatives blaming things ranging from antidepressants to pornography, while liberals simply point to easy access to guns, particularly high-powered weapons like the AR-15 Crimo and many other mass shooters used.

On Wednesday, Dilbert creator Adams shared his thoughts on the matter. Adams, an outspoken conservative, began by saying the Highland Park shooting and fentanyl overdoses “are teaching us the same lesson, and we refuse to learn it.”

Adams said that families are faced with two choices when a young male “is a danger to himself and others”: Watch people die or kill him.

“Those are your only options,” Adams said. “I chose #1 and watched my stepson die. I was relieved he took no one else with him.”

Adams insisted that there’s no such thing as effective treatment for either people struggling with addiction or who might commit a mass shooting.

“If one more person hallucinates to me about some ‘program’ where teens are kidnapped and ‘fixed’ and returned to their happy parents, I might explode,” he wrote.

“No such thing exists. You have two options. Only two. No help is coming. Only death and suffering.”

Adams did offer one possible solution: Put all the dangerous young men somewhere together and let a Lord of the Flies-type experiment play out.

“I think it would involve putting them all in one place so they could only hurt each other, not necessarily in jail, just away from society,” he said.

“Once they are separated from society (and drugs) maybe help is possible.”

“…[B]ut that has to be considered at this point. Otherwise parents have two options,” he wrote. “And you get more of what we are getting.”

Many of Adams’ fans think it’s a great idea. Some suggested options like mandatory military service or putting a wall around California and making the nation’s third-largest state a holding pen for dangerous males.

Others aren’t so sure.

“Scott, as a licensed social worker who primarily works with adolescents in the system, please just stop,” @Sandernista412 replied.

Many people ridiculed Adams’ simplistic idea that you either watch a troubled child die or kill them yourself.

“Excellent idea, Scott, buy an island and drop a bunch of troubled youth off in some sort of ‘battle bus’ perhaps,” one wrote sarcastically.

Some observers were taken aback by Adams’ seeming callousness about his stepson’s death.

“Few people would be able to be unsympathetic about losing a stepson to drug overdose but Scott Adams is just made from different stuff, I guess,” @royaltheartist tweeted.