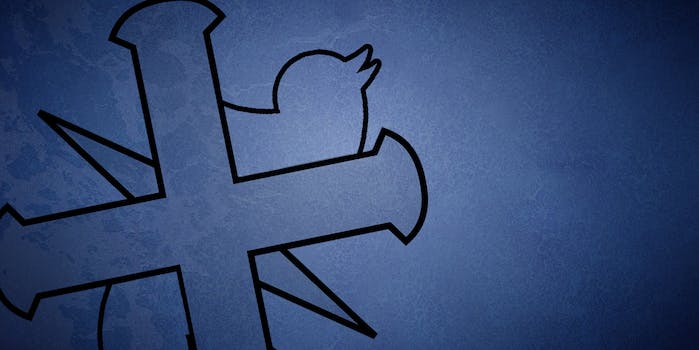 Scientology is using Twitter ads to harass its critics

Unable to win a rational argument, Scientology has resorted to ad hominem insults.

The Church of Scientology has a bizarre online response to the HBO documentary Going Clear, which accuses the group of harassing former members and critics alike.

To counter the documentary’s portrayal of its harassment, the Church has been paying Twitter to promote tweets that mock and disparage its critics.

Journalists have caught screengrabs of at least two promoted tweets from @FreedomEthics, the official Twitter account of Scientology’s Freedom magazine, that use this ad hominem tactic to rebut the documentary’s criticism.

Twitter declined to comment on its advertising arrangement with the Church, telling the Daily Dot that it didn’t address individual ad campaigns. But it is clear from a Twitter search that plenty of people have seen the promoted tweets.

The first tweet accuses the film of using “regular tabloid feeders.” Yet that same tweet mirrors a sleazy tabloid article by including an unflattering bikini photo of Amy Scobee, a former scientologist who wrote the book Scientology: Abuse at the Top. According to a 2010 Freedom profile of Scobee, she “spends her days posting salacious drivel to cyberterrorists on the lunatic fringe of the Internet.”

The second tweet calls Going Clear director Alex Gibney a “Dr. of Propaganda” and links to a video intend to discredit him using the oldest trick in the book of Internet arguments: comparing him to Nazi filmmakers.

#AlexGibney Dr. Of Propaganda: When it comes 2 propaganda the doctor is always in http://t.co/TeWAqs5jMS #GoingClear pic.twitter.com/N9GKOPHPBr

Freedom’s Facebook page, on the other hand accuses Going Clear of a different kind of wrongdoing. Nearly a dozen of its most recent posts include the hashtag #GoingClear, an image of people sleeping in a movie theater, and a string of Zs to indicate sleeping. 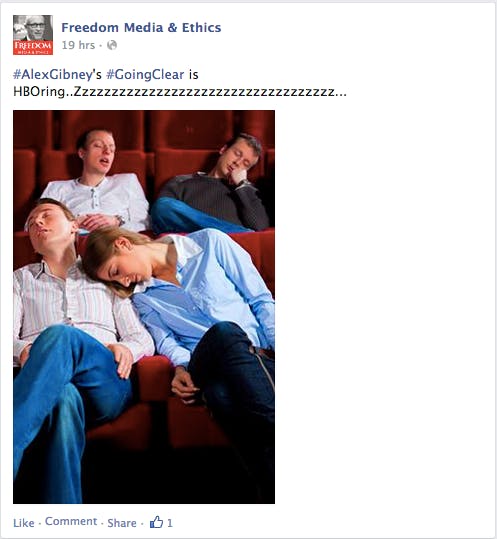 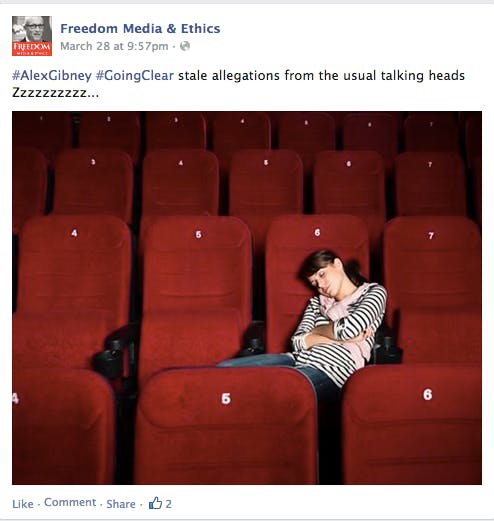