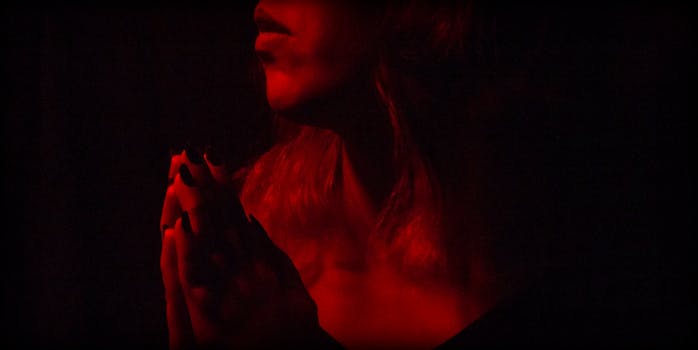 Photo by emilykneeter/Flickr (CC BY 2.0)

The devil's in the details.

For much of 2015, the national debate over religious liberty has centered around a hypothetical scenario involving a Christian baker whose deeply held beliefs are endangered by being forced to serve cake at a gay wedding.

That narrative is about to go straight to Hell.

Determined to make full use of the religious freedoms championed by right wing conservatives, the New York-based Satanic Temple is taking aim at abortion restrictions supported predominantly by Christian politicians. In short, they argue the measures directly infringe upon their religious tenets, which state that “one’s body is inviolable, subject to one’s own will alone.”

Religious-freedom bills, ostensibly designed to protect the rights of the faithful against government oppression, have been introduced in 15 states this year. By no means a coincidence, the influx of legislation follows the expectation that by summer’s end the U.S. Supreme Court will find same-sex marriage bans unconstitutional.

Conservative lawmakers have asserted that the state laws—typically variations of the federal Religious Freedom Restoration Act (RFRA) signed by President Bill Clinton in 1993—are meant to generally protect citizens’ religious beliefs. Nevertheless, they are wholly supported by anti-gay activists, and the passage of each has been celebrated as a victory by fundamentalist Christian lobbyists, who’ve all but abandoned hope that their states will remain untouched by the so-called ‘liberal gay-marriage agenda.’

Despite the controversy over gay wedding cake, religious-freedom laws have also been celebrated for protecting the rights of religious minorities.

A federal judge ruled on Tuesday, for example, that Florida prisons are required to serve kosher meals to Jewish prisoners. In March, the federal government was forced to return eagle feathers—illegal to own under many circumstances—stolen by undercover agents nine years ago from a Native American religious leader. Earlier this year, Abdul Muhammad, a Muslim incarcerated in Arkansas, won a case against the government after prison authorities denied him the right to grow a customary 1/2-inch beard. And in November, the government settled a case brought by a Sikh woman fired from the IRS for carrying a blunt religious dagger known as a “kirpan.”

The case that may decide if the Satanists have legal grounds is that of a young Missouri woman known only as “Mary.” According to the Satanic Temple, Mary—not her real name—has decided to challenge the 72-hour waiting period imposed on women seeking an abortion procedure.

(Because Missouri is one of six states that has only a single abortion provider, meaning it’s routinely under surveillance by anti-abortion activists and subject to almost constant protest, the Daily Dot is withholding the details of Mary’s appointment due to her safety and privacy concerns.)

“I think we’re going to find it plateau by the middle ground at which religious liberty is actually tenable.”

Mary’s case will also challenge the standard of informed consent in abortion procedures. In patient terms, informed consent generally refers to a one’s right to receive accurate and unbiased information about medical care ahead of a procedure. In the case of abortion, however, the information women are provided may have little to do with informing their decision medically and is, instead, often based on unscientific data.

For example, a clinic may be required to tell a woman about the risks associated with “post-abortion syndrome,” a condition that has not been proven to exist, is not recognized by the American Psychological Association, but is nevertheless pushed on patients through laws introduced by pro-life politicians.

In 2001, Illinois state Rep. Dan Reitz, who introduced a bill that included the erroneous medical condition, told Newsweek in a moment of pure honesty: “I’m not really sure about the science. My intent was strictly about limiting abortion.”

The Satanic Temple will seek a waiver of both informed consent and the 72-hour waiting period for Mary, on the grounds of religious freedom.

“We had that informed-consent waiver in place this past summer, and nobody had taken us up on the possibility of a legal challenge, of going to a clinic and actually using it, until recently,” Doug Mesner, a spokesperson for the Satanic Temple, says during a phone interview. “A woman approached a member of the Satanic Temple and said that she was in Missouri, and that she’s also a member, and would like to use the waiver.”

The group has offered similar waivers in the past, for instance, one for parents who oppose corporal punishment in schools. “Nineteen states allow schools to beat their children, and many more allow the use of isolation rooms. This offends our religious sense of bodily autonomy,” Mesner says.

It was only after Mary approach the Satanic Temple about the informed-consent waiver that the group recognized “a far dire need” for an exception against the 72-hour waiting period imposed against women in Missouri.

“The 72-hour waiting period means that somebody may have to travel twice, at possibly a great distance, or there’s a burden of three days of having to pay lodging elsewhere,” Mesner said. “Plus, you’re talking about taking the time off of work and everything else, and there’s no medical need for this waiting period, so we feel that we can have an exemption for that as well.”

Others have attempted to illustrate in the past how both the waiting period and informed consent requirements place an undue burden on women. But the Satanic Temple’s case is the first to make that argument leveraging religious-freedom laws. The group launched an Indiegogo campaign this week to support Mary’s case and raised over $1,200 in the first 48 hours.

“The burden of proof is on them to show that they have an imminent need to put this kind of restriction in place,” Mesner says, “as it does violate our sense of religious identity.”

A fight as old as time

The Satanic Temple’s move to invoke the RFRA with regards to reproductive rights is not entirely unexpected. When the federal bill was up for consideration in 1993, the notion that it could be used to defeat abortion restrictions was a topic of testimony in the House Judiciary Committee. Catholic bishops insisted that lawmakers include an exemption for abortion under the RFRA—a recommendation that was ultimately ignored.

“The burden of proof is on them to show that they have an imminent need to put this kind of restriction in place.”

Mark Chopko, then-general counsel to the United States Catholic Conference, warned the legislators: “Even if only a few claims to obtain abortions do succeed under [RFRA], what restraint will remain on district and state attorneys to deny abortions to others who offer affidavits conforming their claims, beliefs, and motions to the prior successful claims? These claims will be numerous and far-reaching in their impact.”

“It’s been bastardized now to be leveraged in support of a majority religion, who feel that they’re being marginalized and abused by gay rights,” Mesner says of the RFRA. “But the fact of the matter is, it still works the other way, too.”

By furthering the use of the RFRA to support minority religious views, Mesner believes there will be fewer “thinly veiled theocrats” trying to impose their religious agenda on the rest of the population.

“I think we’re going to find it plateau by the middle ground at which religious liberty is actually tenable, actually does support people’s sense of culture identity, and we’ll find … where the boundaries are to that,” he says. “And I think the only way we’ll do that is by test cases like this.”

Photo by emilykneeter/Flickr (CC BY 2.0)