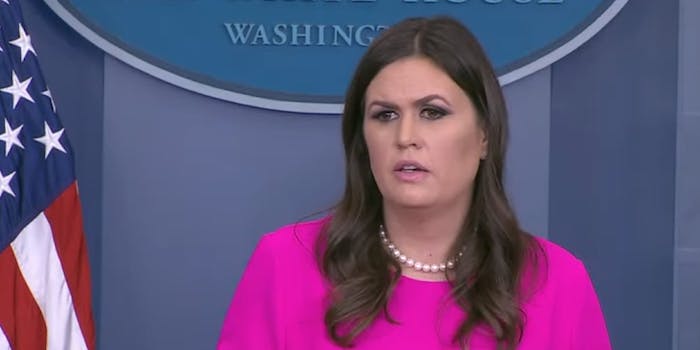 Except Trump has spent more time at golf clubs than the Senate has taken off.

When asked whether Trump’s repeated attacks on members of Congress–most recently Sen. Bob Corker (R-Tenn.)–have helped him push his agenda, including his ambitious reform of the tax code, Sanders changed the subject to the Senate itself.

“The president’s very committed to getting tax reform done,” Sanders said. “Look, he’s calling on Congress to get their job done. They’re on another vacation right now. I think that we would all be a lot better off if the Senate would stop taking vacations and start staying here until we actually get some real things accomplished. The president’s here and he’s committed to working with them to do that.”

Both the Senate and the House of Representatives take several weeks off throughout the year that are built into a pre-determined calendar. So far this year, the Senate had 59 scheduled days off, according to the calendar.

Trump, meanwhile, has made 67 visits to golf clubs since taking office and has been confirmed to have golfed during those visits at least 28 times, according to TrumpGolfCount.com.

It’s no secret that Trump has grown frustrated with Congress. Despite controlling both the Senate and the House of Representatives, Republicans have not been able to achieve a major legislative agenda item–most notably failing to repeal and replace, or just repeal, the Affordable Care Act.

The irony of Sanders calling out the Senate–and not Trump–for taking vacations was not lost on people.

@PressSec did you really just call out the senate for taking too much vacation time? Without any note of irony? How is that possible?!

Did SHS seriously just say that the Senate needs to not go on vacations? Her boss has been on vacation damn near every weekend! pic.twitter.com/6UC0F9mTRk

@PressSec saying the Senate is always on vacation is a joke. @realDonaldTrump is on vacation every fucking weekend.

Did Sarah Huckabee sanders just say she wished the Senate would stop taking vacation to get things done? Well that is truly hilarious