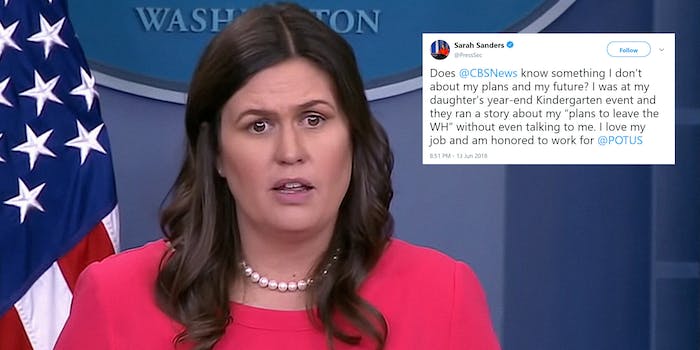 Press Secretary Sarah Sanders tweeted a strident denial last night of a CBS News report that she was plotting her White House exit.

Does @CBSNews know something I don’t about my plans and my future? I was at my daughter’s year-end Kindergarten event and they ran a story about my “plans to leave the WH” without even talking to me. I love my job and am honored to work for @POTUS

The only problem with that? No one believed her.

I can't wait for this to age like the untouched bag of salad in my fridge https://t.co/lSKSVK13YC

CBS published its report late Wednesday, saying that Sanders had told friends she would be leaving the White House soon. CBS also reported on the possible departure of her deputy, Raj Shah.

And while it’s within Sanders right to challenge the report, her adamant answer to it would probably have a lot more force if it didn’t come in the wake of a week where she and the White House’s credibility was repeatedly challenged the press.

Although this administration has always been a hive of disinformation—including a report this week that said it was deliberately planting false stories to catch leakers (which hey, maybe this was one?)—Sanders’ relationship with the truth came to a head last week over accusations she lied from the White House podium.

Sanders was pressed over a report about the White House counsel’s communication with Special Counsel Robert Mueller’s team, which revealed some statements Sanders made that were inaccurate or misleading. Sanders refused to retract her false statement or apologize for misleading the White House press corps.

Add that to the fact that a number of Trump officials have publicly stated their love of serving the president, only to get the ax a short time later, and no one on Twitter could let Sanders’ denial stand.

For a woman who would literally deny Trump ever met Barron if he asked her to, this is a really bad denial. https://t.co/XxUxiYU6ex

If you had any credibility I’d give you the benefit of the doubt but I don’t believe you Sarah…you’re a lying liar. https://t.co/Kum8wr2v8G

We will update this story with the announcement of Press Secretary Judge Jeanine Pirro in, oh, two weeks.