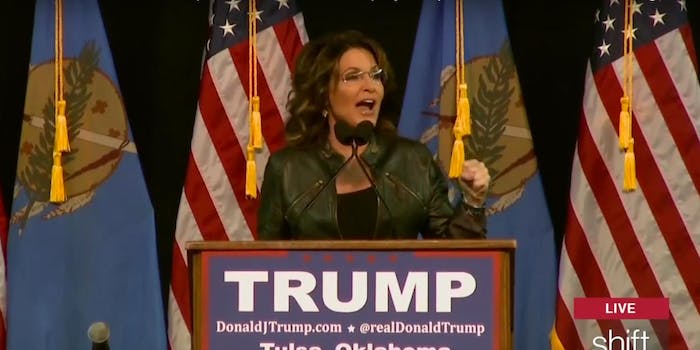 Fresh off her endorsement of Donald Trump, Sarah Palin is throwing punches at President Barack Obama, whom she seems to blame for her son Track’s recent domestic violence arrest.

Speaking at a Trump campaign stop in Tulsa, Oklahoma, on Wednesday, Palin addressed what she called the “elephant in the room”: her own family “going through what we’re going through today with my son, a combat vet,” an issue she directly linked to what she believes is Obama’s lack of respect for veterans who return from combat with post-traumatic stress disorder.

“My son, like so many others, they come back a bit different, they come back hardened,” Palin said. “They come back wondering if there is that respect for what it is that their fellow soldiers and airman and every other member of the military so sacrificially have given to this country.”

Palin continued: “That comes from our own president… where they have to look at him and wonder, ‘Do you know what we go through? Do you know what we’re trying to do to secure America?’… So when my own son is going through what he goes through coming back, I can certainly relate with other families who kind of feel these ramifications of some PTSD and some of the woundedness that our soldiers do return with.”

Track Palin, 26, was arrested Monday night after police arrived at the family’s residence in Wasilla, Alaska, in response to a 911 call. Court documents obtained by KTVA Alaska said that Palin had been arguing with his girlfriend over contact with her ex-boyfriend. A responding officer said Palin was “uncooperative, belligerent and evasive with my initial line of questioning,” according to court documents.

The girlfriend told a police officer that Palin “struck her on the left side of her head near her eye with a closed fist” before kicking her in the knee. Palin then allegedly threw her phone, chased her with an AR-15 rifle and, according to the police report, said “Do you think I’m a pussy?” and “Do you think I won’t do it?” Police told Gawker he was “intoxicated at the time,” and he was found to have a blood-alcohol level of 0.189 percent, well above Alaska’s legal limit for driving, o.04 percent.

Palin’s girlfriend said she was “concerned” he would take his own life.

Track Palin enlisted in the U.S. Army in 2007 without telling his parents beforehand, and he served in Iraq in 2008. PTSD affects approximately 3.6 percent of all Americans, according to the National Institutes of Health—with 36.6 percent of these classified as “severe.” Symptoms can include depression, anxiety, sleep problems, feelings of detachment, among other issues.

The U.S. Department of Veterans Affairs estimates that between 11 and 20 percent of Iraq war veterans live with PTSD.

Track Palin was charged and arraigned on Tuesday, the New York Times reports. He entered a plea of not guilty.