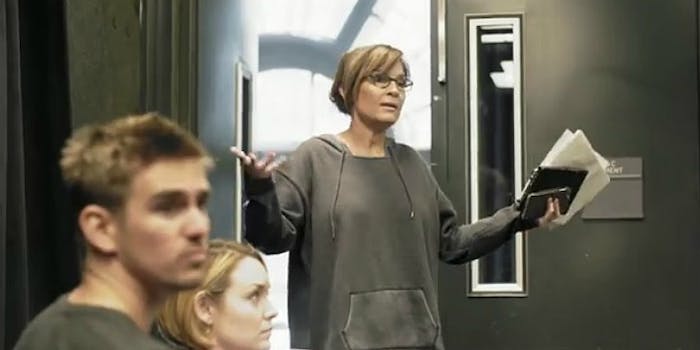 Sarah Palin is back to mock Tina Fey and ’30 Rock’

Former Republican vice-presidential candidate Sarah Palin proved adept at making jokes and taking them during the 2008 campaign. She had to watch as Tina Fey skewered her on Saturday Night Live—a portrayal that, in some ways, defined her to the general public more than she ever did herself—but she proved that she was a good sport about it.

While Palin has wandered through the deserts of political irrelevance since the 2008 election, she returned this week to make fun of Fey and her old show 30 Rock. The effort isn’t bad, and while 31 Rock isn’t gut-bustingly hilarious, Palin’s impression of Fey is solid. Plus, the cameos by Lindsey Graham—who on Monday dropped out of the 2016 presidential race—and Palin’s old running mate John McCain are perfect.

Yes, the sketch doesn’t make much sense, and yes ,and the timing of the parody is a bit weird—and was that really Dot Com, who would be the only participant in 30 Rock and 31 Rock?—but it was a good effort from Palin, who is apparently selling a new book and continues to give away free content to the lamestream media.