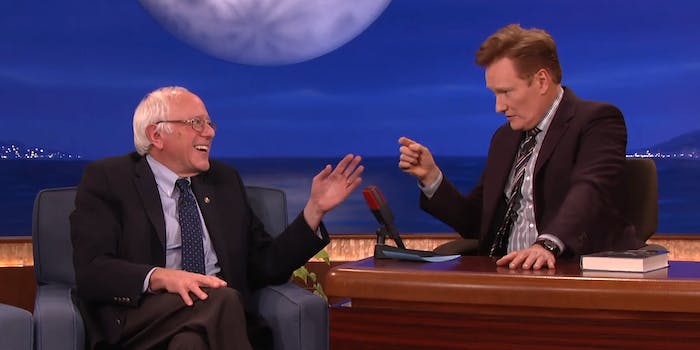 Bernie Sanders: ‘I wish to God’ I could have taken on Donald Trump

Sanders had some choice words about Trump's voter fraud claims, too.

Could Sen. Bernie Sanders have beaten Donald Trump in the presidential race? It’s a question that many despondent supporters have pondered but one that Conan O’Brien was able to finally put to the independent Vermont lawmaker on Tuesday night’s episode of Conan.

“Who knows,” reflected Sanders briefly. “I wish to God that I had had that opportunity.”

The notion that, given the chance, the progressive Democratic presidential candidate could have won an election victory over Trump is not that much of an overreach. In fact, polls from last May compiled by RealClearPolitics tested the hypothetical with voters several times. On every occasion Sanders beat Trump—averaging 10.4 points ahead of his rival. Of course, opinion polls were notoriously hit and miss throughout the election, but one can’t help but wonder how the political landscape would look had Sanders vs. Trump happened.

Sanders, who spoke frankly throughout the interview, refused such indulgent daydreams about what might have been. He quickly called on disillusioned voters not to abandon the political system but to remain engaged in it, despite admitting concern at the ominous and “scary” messages emanating from the president-elect’s Twitter ramblings about “voter fraud.”

“First of all, it’s delusional, it’s totally insane,” Sanders said. “Nobody believes that who studies elections or election patterns.”

Sanders then went on to explain what he believed to be Trump’s underlying message: “When he says that, he’s really sending a signal to Republicans all over this country, Republican leaders, and what he’s saying is: ‘We have got to suppress the vote, we have got to make it harder for poor people, people of color, immigrants, elderly people, to participate because they may be voting against us.’ And that’s scary stuff.”

Sanders leveled further criticism at Trump’s call to revoke of citizenship of those who burn the American flag where, Sanders insisted, another sinister “hidden message” was being communicated.

“That is, ‘Be careful if you are prepared to dissent,’” Sanders told O’Brien. “What he is really saying is, ‘If you really want to dissent, be careful. It’s not just the American flag here, we’re watching you.’”

Asked by the host whether he was feeling optimistic at all about the next four years under the Trump administration, the senator replied, “I wouldn’t use the word ‘optimism.’”

“[Trump] is clearly not an ideological person. I think he develops his policies every 10 minutes and he tweets them out,” Sanders retorted to laughter. “But in a sense, the positive of that is what you’re indicating, they’re not firmly held. And they may change.”