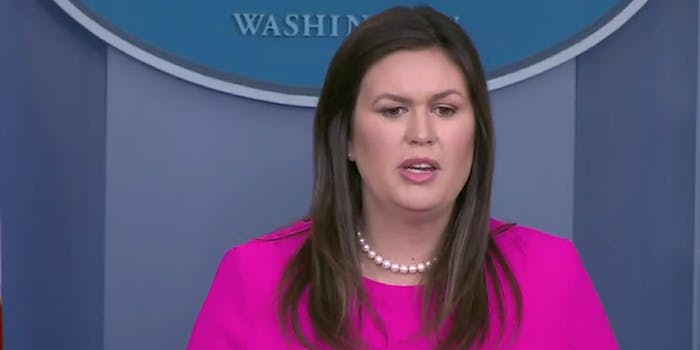 Apparently a number of people who have been critical of Trump may have their security clearance revoked.

White House Press Secretary Sarah Huckabee Sanders said on Monday that President Donald Trump is exploring taking away the security clearances of many people who have been critical of him, including former FBI Director James Comey and former CIA Director John Brennan.

When asked about a demand from Sen. Rand Paul (R-Ky.) to strip the security clearance of Brennan—who has been highly critical of Trump on numerous occasions—Sanders said the idea has been floated in the White House.

When asked specifically if any former official who had security clearance under former President Barack Obama would lose it, Sanders continued:

“As of right now, we are exploring the mechanism on those specific names,” Sanders said. “I’ll keep you posted when there is further information.”

Sanders also said she was not “aware” of any other actions that would be taken against the people she named.

“The president doesn’t like the fact that people are politicizing agencies and departments that are specifically meant to not be political and not meant to be monetized off security clearances,” she said, later adding: “When you have the highest level of security clearance, when you’re the person that holds the nation’s deepest, most sacred, secrets at your hands and you go out and make false accusations against the president of the United States, he thinks that is something to be very concerned with and we’re exploring what those options are and what that looks like.”

All of the people mentioned by Sanders have been critical of Trump. Comey, who was abruptly fired by the president last year, has made numerous remarks, including urging people to vote for Democrats in the 2018 midterms.

Sanders ended the press conference by saying she was “not aware of any plans” for Obama or former Vice President Joe Biden to have their security clearance stripped away after being asked about the possibility.