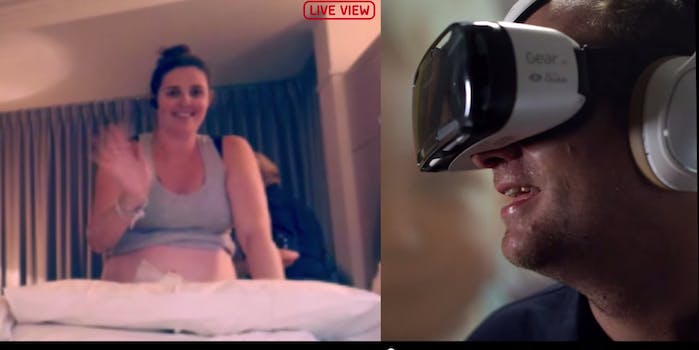 VR headset lets man watch his wife give birth from 2,500 miles away

Try not to tear up as you watch this video.

We tend to think of virtual-reality headsets as gaming devices, but Samsung has put together a video showing one of their more touching real-world applications: bringing families together.

The video introduces Australian couple Alison and Jace, who are often separated thanks to Jace’s job on the other side of the country. Alison is pregnant, and Jace will be working 2,485 miles away when she’s due to give birth. This is where Samsung’s virtual-reality technology comes in.

Samsung engineers set up audio and and video equipment in Alison’s hospital room, allowing Jace to watch and listen from his remote workplace in Queensland. Some people might find this creepy, but for Jace and Alison, it’s the only way for the father to witness the birth of his new son.

This video is basically a glorified ad for Samsung Gear VR, but it does make us think more about the possible applications of virtual-reality tech.

The setup for mapping an entire room is way too complicated and expensive for use in everyday life, but we can definitely imagine people renting the service for major life events. After all, people have been attending weddings via Skype for a few years now, and some would find the VR-headset experience more personal and realistic.