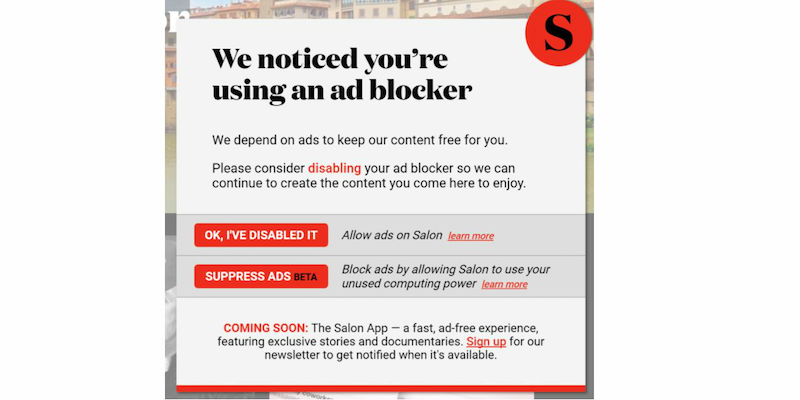 The mining plugin will only run on Salon.

Popular news outlet Salon is giving readers an ultimatum: Turn off your ad blocker or let it use your computer to mine cryptocurrency. The publication updated its website this week, forcing users to choose one of two ways to view its content without ads.

Many sites that rely on advertisements already ask users to turn off ad blockers, which can have a devastating effect on their bottom line. But few give them an alternative method for browsing without ads. Those that do typically offer a monthly or yearly paid subscription. Mooching off unused CPU is a novel approach—one that could either have huge financial benefits or do damage to Salon’s reputation.

When you open a Salon article with an ad blocker enabled, a pop-up will appear. From there, you can either configure your ad blocker to show ads on the site’s domains or select “Suppress Ads” to “block ads by allowing Salon to use your unused computing power” so it can mine Monero. If the virtual coin sounds familiar, it’s because Monero is popular among cryptojackers, or sites that use the Javascript plugin Coinhive to mine cryptocurrency without permission.

Your inclination may be to disable your ad blocker or even hurriedly click out of the website. That’s a reasonable reaction given cryptocurrency’s reputation and the methods by which some sites deceivingly mine it. Just over the weekend, security researcher Scott Helme found a mining malware he believes was hidden on more than 4,000 websites. However, unlike the hackers we’ve seen over the past few months, Salon is being transparent about the benefits and drawbacks of enabling its cryptocurrency miner.

“Think of it like borrowing your calculator for a few minutes to figure out the answer to math problems, then giving it back when you leave the site,” the publication wrote on its website. “We automatically detect your current processing usage and assign a portion of what you are not using to this process.”

As it clarified, if you choose to let Salon mine cryptocurrency, it will borrow unused processing power only when you browse on Salon. It will remember your choice for 24 hours, after which you’ll be asked to opt-in again.

There are some downsides to be aware of. If you offer your CPU power to Salon, your computer will work harder and use more electricity. Even though Salon assures it will decrease CPU usage if it detects your computer using too much power, it could still have a significant impact on your machine. Ars Technica’s Jon Brodkin enabled mining on Salon to see what would happen. His CPU usage jumped to a “highly unusual total” of 499 out of 800, which caused his computer fan to kick on.

Salon explains that its unconventional revenue route is a result of journalism’s failure to find financial footing in the internet age. The industry has, for centuries, relied on ads and still does today. But online ads aren’t worth much and the market is dominated by the likes of Google and Facebook. The news outlet says the possibilities of cryptocurrency are “limitless.”

“In the future, your spare computing power may go to solving the kinds of complex math problems that form the integrity of blockchains, but it can also be used for humanitarian and scientific projects such as helping research how proteins fold, to aid in biological discovery or helping pay for misdemeanor prisoners’ bail, or to see if we can better predict the impact of climate change,” Salon claims.

That last point is particularly deceiving. Salon fails to mention that Bitcoin mining alone is consuming as much energy as Denmark. According to Digiconomist, a single Bitcoin transaction consumes enough energy to power nine houses. By 2020, Bitcoin mining will use as much energy as the entire world. This could have a disastrous impact on our environment, especially if more publications see virtual coin mining as an alternative revenue stream.

There are a few routes you can take if you don’t want sites to leech off your computer or you care about the environment. The most obvious is to brave the hellscape of online ads. Fortunately, for Chrome users, that chore is becoming easier. Starting tomorrow, Chrome will automatically block the internet’s most intrusive ads—pop-ups, autoplay videos, and flash animations—using a new built-in ad blocker. Another way is to purchase Salon’s upcoming ad-free mobile apps. Or, you know, find another place to read the news.