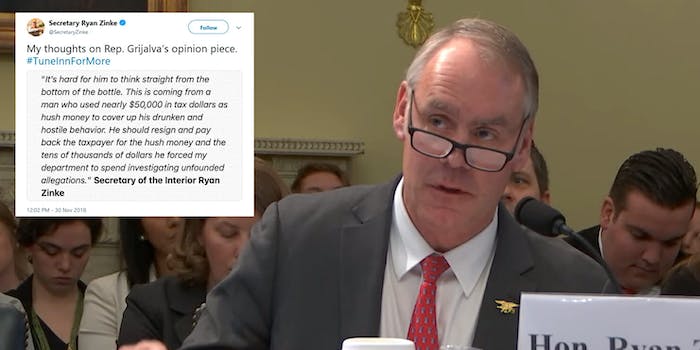 People found his response quite intense.

Interior Secretary Ryan Zinke accused a member of Congress of having a drinking problem in an attempt to defend himself after the congressman wrote an op-ed calling for Zinke’s resignation.

Rep. Raúl M. Grijalva (D-Az.) called on Zinke to resign in an op-ed for USA Today, citing “ethical and managerial failings” from the interior secretary.

“While the secretary continues to project confidence, questions have grown since the election about his future plans, and the White House reportedly fears that he would be unable to withstand scrutiny on Capitol Hill,” Grijalva wrote in the op-ed. “Those fears are justified. Mr. Zinke has never even tried to offer an explanation for the sheer scope of his well-documented scandals.”

It appears, however, that Zinke wasn’t going to let the op-ed stand without pushing back.

In a statement released on Twitter, Zinke blasted Grijalva and implied that he had a drinking problem.

“It’s hard for him to think straight from the bottom of the bottle,” Zinke wrote. “This is coming from a man who used nearly $50,000 in tax dollars as hush money to cover up his drunken and hostile behavior. He should resign and pay back the taxpayer for the hush money and the tens of thousands of dollars he forced my department to spend investigating unfounded allegations.”

Many people online were in disbelief that the interior secretary would come out so strongly against a member of Congress.

Facing hearings into his alleged corruption and misdeeds, Zinke takes a page from his boss's playbook. He calls committee chairman a drunk. https://t.co/EHLyEXu3di

Perhaps the most clear sign yet that @SecretaryZinke has one foot out the door? (also, this is crazy) https://t.co/DhqkV67iBA

well, this seems like a dignified use of the office

This seems like a pretty good indication that Zinke doesn't plan to remain in office for any oversight hearings come January. https://t.co/L43J8bw0ua

This is insane, but then again, everything is. https://t.co/csa1oNrxxQ

You can read all of Grijalva’s op-ed in USA Today here.