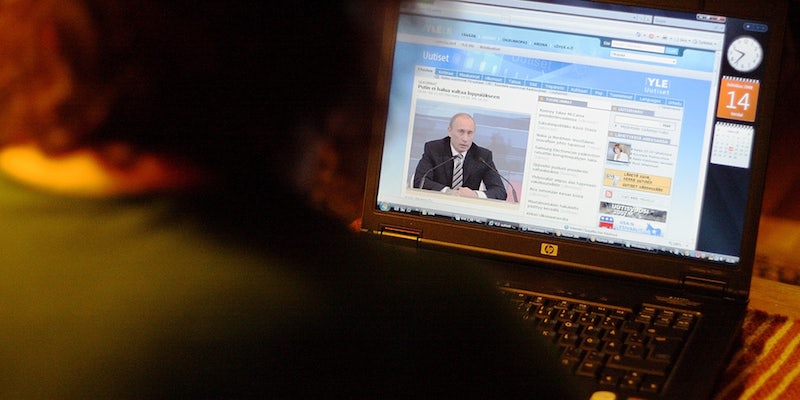 “This is another milestone in Russia’s relentless crackdown on free expression."

Russia’s new law restricting what bloggers can say on the Internet takes effect today, to the outrage of writers inside and outside of the notoriously repressive state.

The law requires bloggers to register with the Federal Service for Supervision of Communications, Information Technology and Mass Media, also known as Roskomnadzor, if they have more than 3,000 readers a day. It also gives the government expanded access to the data that Russian Internet service providers collect on their customers.

Human Rights Watch’s Europe and Central Asia director Hugh Williamson said in April that the law would force bloggers to “abide by the same restrictions as mass media without giving them the same protections and privileges.”

“This is another milestone in Russia’s relentless crackdown on free expression,” Williamson said.

The law is designed to de-anonymize the activities of Russian bloggers, some of whom have proven to be thorns in the Russian government’s side. Veteran Russia-watchers expressed concern about its likely chilling effects.

“The whole package seems quite restrictive and might affect harshly those who disseminate critical information about the state, about authorities, about public figures,” Mass Media Defense Center director Galina Arapova told the New York Times.

Voice of America reported that fines for individual bloggers who refused to register could be as high as $1,400, while blogging organizations could face fines of up to $14,000. In addition, the Russian government has the authority to censor content written by non-compliant bloggers within its territory.

NSA whistleblower Edward Snowden, who is seeking refuge from U.S. authorities in Russia, attacked the law in May, shortly after it was proposed. “It’s frustrating for someone working so hard to expand our rights to end up in a place where those rights are being challenged,” Snowden told NBC’s Brian Williams. “I can’t think of a basis for that law in Russia or in any country.”

Photo via Timo Kuusela/Flickr (CC BY 2.0)