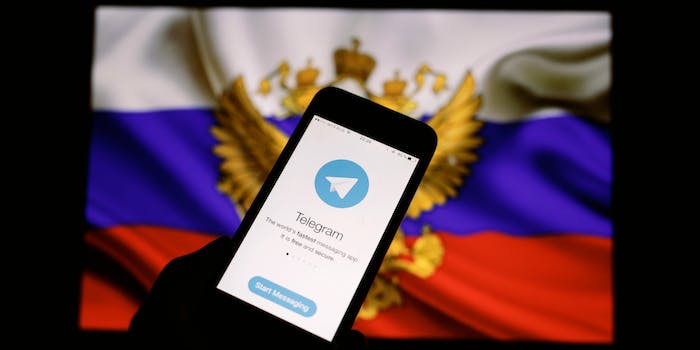 Russia brings down its internet trying to hunt down Telegram app

More than 19 million IPs were blocked.

Russia’s internet is imploding as a cat-and-mouse game to track down and ban messaging app Telegram has turned into a series of embarrassing blunders.

Last week a Russian court established a ban on the encrypted messaging app Telegram for refusing to provide authorities access to conversations. Telegram denied government requests to hand over encryption keys to its software. In response, Russia on Monday began its efforts to ban Telegram.

But things have not gone according to plan. Instead of denying users access to the app, Russia has, through a chain of thoughtless mistakes, succeeded in blocking thousands of innocent websites. The plan for Russia’s censorship body, the Federal Service for Supervision of Communications, Information Technology and Mass Media (conveniently abbreviated to Roskomnadzor), was to get local ISPs to block access to IP addresses that use Telegram. But before it could do so, the app repeatedly changed its IP address—a practice called IP hopping—after moving itself over to Google and Amazon’s cloud infrastructure.

Roskomnadzor lost its scent and responded by haphazardly blocking dozens of Google and Amazon subnetworks containing nearly 19 million IPs. The result: Thousands of Russian businesses and services, including banks, gaming servers, and IT infrastructure were kicked offline. Unsurprisingly, those companies used the same cloud servers as Telegram.

As reported by the Washington Post, millions of rubles have been lost in the last week and several businesses are planning to file a class-action lawsuit against Roskomnadzor. The agency responded by claiming no “socially relevant resources” were affected by the ban. Some of the best-known sites affected include Twitch, FIFA, Slack, Soundcloud, Viber, Spotify, Nintendo, Google, and Amazon.

And yet, through the fog of millions of IP shutdowns emerged Telegram, unscathed. Charismatic Telegram founder and CEO Pavel Durov said the app has not seen “a significant drop in user engagement so far.”

“Since Russians tend to bypass the ban with VPNs and proxies. We also have been relying on third-party cloud services to remain partly available for our users there,” he said before thanking Apple, Google, Microsoft, and Amazon for “not taking part in political censorship.”

I have criticized @telegram's security model in the past, but @Durov's response to the Russian government's totalitarian demand for backdoor access to private communications—refusal and resistance—is the only moral response, and shows real leadership. https://t.co/KtZDpu33wh

Durov, dubbed the Russian Zuckerberg by some, left the country in 2014 after being ousted from VKontakte, the immensely popular social network he created, for criticizing Russia’s censorship policies. He now considers himself a “legal citizen of the world” and his Telegram app already has 200 million users, 14 million of which are in Russia.

Apart from allowing people to organize anti-government protests, Russia is adamant about purging Telegram because of potential terrorist activity. The Federal Security Service said it has “reliable information” that terrorists used the app prior to the April 2017 attack in St. Petersburg that killed 15 people.

As Telegram successfully evades Russia’s grasp, pressure amplifies for the U.S. companies enabling its escape. Reuters reports Roskomnadzor has asked Google and Apple to remove the messaging service from their app stores. Those companies cracked under pressure in a similar incident involving Austin, Texas-based walkie-talkie app Zello, which refused to comply with Russia’s request to record conversations. Zello then hopped around IP addresses until Google and Amazon told it to stop. U.S. providers have not yet disclosed whether they will take action against Telegram.

Durov has promised to invest a million dollars in VPN services that allow users to access the app without giving off their location. He says he will continue to engage in “digital resistance” against Russia.