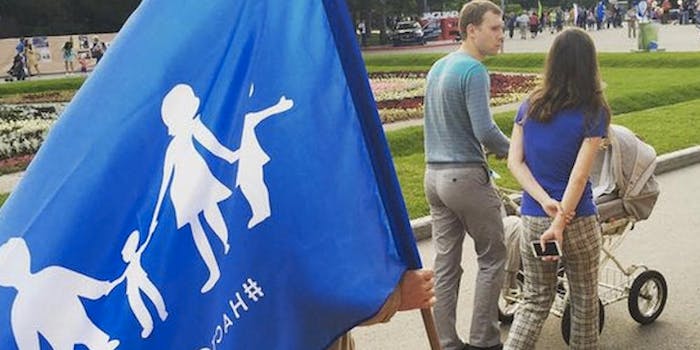 Yet another way for those of alternative sexualities to be alienated in Russia.

Russia is so eager to distance itself from condoning homosexuality that President Vladimir Putin’s United Russia Party unveiled a flag this week to celebrate conventional, heterosexual family life.

The immediate and obvious criticism is that the party has introduced a “straight pride” flag to play against the LGBTQ community’s iconic rainbow flag, though the party maintains it is no such thing. United Party deputy head Andrey Lisovenko defended the new flag to On-Demand News, explaining that the flag celebrates “traditional” values and is not meant to attack gay people.

“We are speaking of the traditional family…” he said. “We mean the average, standard Russian family that is ours, as you see illustrated in the logo.”

Let’s talk about this flag’s logo, which pales in comparison to the vibrant rainbow LGBT flag.

Come on #Russia, let's get it together! #НастоящаяCемья This is a real family too! pic.twitter.com/GTeFLrNnu9

If you merge Russia´s new ´straight´ flag with a rainbow can it represent everybody? #НастоящаяCемья pic.twitter.com/Ew7YKPFPMy

A recent hidden camera video makes it abundantly clear that Russia is not an easy place for homosexuals to live a peaceful life. One Russian lawmaker is even seeking to ban the rainbow flag in all forms, including its use on social media.

While America rides its legislative high in the wake of passing marriage equality, this serves as a solemn reminder that many parts of the world have a long way to go.