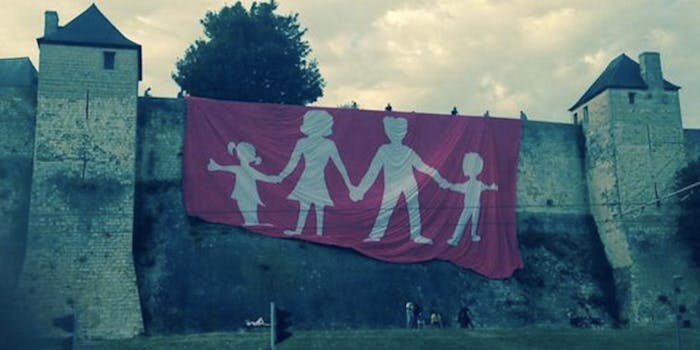 Russia’s newly unveiled “straight pride” flag is not what it seems—in fact, it’s not even Russian.

United Russia did not design the flag all by itself, however. Instead, the design was appropriated without permission from the flag of a contemporary French political movement called La Manif Pour Tous (“The Protest for Everyone”), reports Russian news site Meduza.

Compare Russia’s blue flag, which features a nuclear family of five and the Russian characters meaning “a real family,” to France’s pink flag showing a family of four. Both are waved in protest of gay marriage and alternative lifestyles, but only one of them is original.

A representative of the United Russia political party told Meduza that this alteration of the French group’s flag was made with permission. Representatives for La Manif Por Tous said that this is not the case and that they learned about Russia’s new flag on the news.

La Manif Por Tous remains active today and still uses its image often, even getting some press earlier this week for seeing its logo draped over the side of France’s Chateau de Caen.

The flags are ideologically linked. La Manif Pour Tous debuted in oppositional response to France’s legalization of same-sex marriage in 2013, and Russia’s administration is famously inhospitable to its gay citizens. While it is not against the law to be gay in Russia, it is considered illegal propaganda to talk about being gay in public. Gay citizens may also be provoked and assaulted. A recent hidden-camera video puts one aspect of gay life on display in Moscow, and the results are surprising.

As a country, Russia has a lot of progress to make in how it interacts with the LGBT community. But some Russian citizens are already lampooning their country’s new, unusual, and unoriginal flag online.