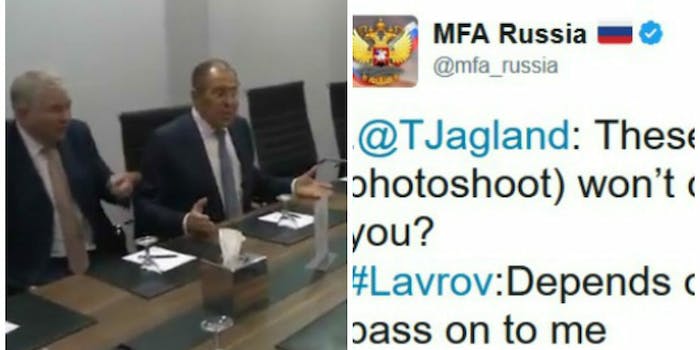 Everybody had a good laugh.

Say this for the Russian Foreign Ministry: It’s got a biting sense of humor.

While Americans are inundated by the multiple investigations into Russia’s alleged ties to the Donald Trump administration—former FBI director James Comey is going to testify publicly, and investigators are now looking directly at people working inside the White House—Russia is having fun at the expense of one of this month’s biggest stories.

On Thursday, Lavrov burned Trump in front of Thorbjørn Jagland, the secretary general of the Council of Europe, after he asked if he should be worried about the photographers who were snapping pictures of the meeting.

.@TJagland: These pictures (protocol photoshoot) won’t cause any problems for you?#Lavrov:Depends on what kind of secrets you pass on to me pic.twitter.com/aCXMMzSur4

The backstory here is that Trump banned the U.S. media from his meeting with Lavrov earlier this month but allowed in a Russian photographer, who later released photos (much to the surprise of the administration) and who later was found to have recorded the meeting.

Clearly, Lavrov is having fun at the expense of Trump and the American people. When he participated in a press conference with the U.S. press, he sarcastically expressed shock that Trump had fired Comey. The joke, then, was on Comey. This week, though, the joke was on Trump.

What’s not quite as funny, though, is what the Russian Embassy in the U.K. tweeted on Friday, pushing the theory that Seth Rich, a DNC staffer who was murdered last year, was leaking damaging emails to WikiLeaks during the presidential election.