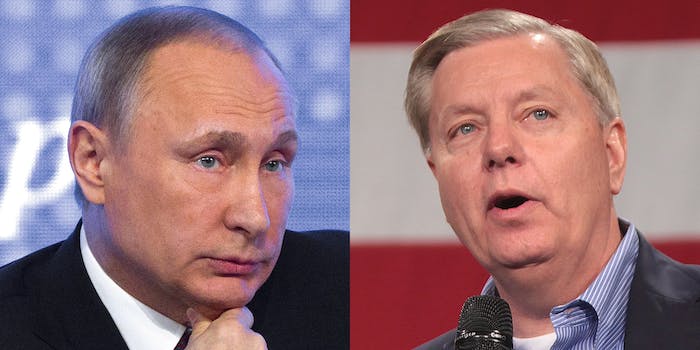 Sen. Lindsey Graham (R-S.C.) revealed on Wednesday one of the likely steps Congress will take against Russia in response to cyberattacks during the U.S. presidential election.

“There will be bipartisan sanctions coming that will hit Russia hard, particularly Putin as an individual,” said Graham, who is currently visiting the Baltic states alongside Sen. John McCain (R-Ariz.), in an effort to reassure allies of the U.S. government’s commitment to NATO.

“It is now time for Russia to understand–enough is enough,” Graham said, according to Reuters. “Here’s what you can expect in 2017 in the United States: a bipartisan effort in Congress to push back against the Russian interference in our election.”

U.S. intelligence agencies have concluded that Russia attempted to influence the outcome of the U.S. presidential election with strategic cyberattacks, including a breach of the Democratic National Committee. More than 44,000 DNC emails were released by WikiLeaks and other outlets in July.

The Russian government has denied any involvement.

CrowdStrike, a California-based cybersecurity firm hired by the DNC, says it is “highly confident” the hackers responsible have direct ties to the Kremlin; the malware reportedly used by the intruders has also recently been used against Ukrainian field artillery units, the firm said.

The Obama administration may announce as early as next week measures intended to punish Russia as well, the Washington Post reported. The response may include covert cyber-operations, according to Post sources.

President-elect Donald Trump raised tensions in Estonia, Lithuania, and Latvia during the campaign by suggesting the U.S. might not honor its commitment to the NATO military alliance.

“They have an obligation to make payments,” Trump told the New York Times in July. “Many NATO nations are not making payments, are not making what they’re supposed to make. That’s a big thing. You can’t say ‘forget that.’”

After a trip to Latvia on Wednesday, Graham and McCain will travel to Lithuania on Thursday.