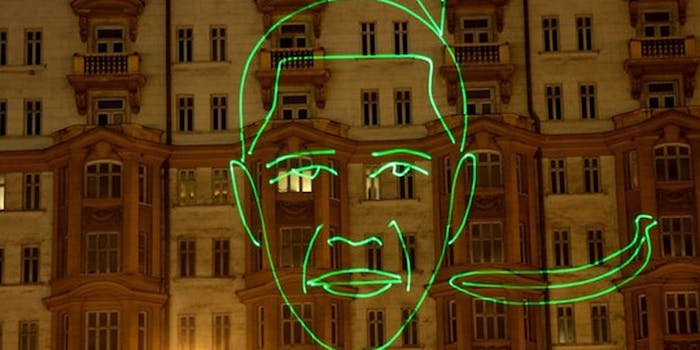 The writing's on the wall—and it aint pretty.

President Barack Obama turned 53 on Monday, and you know what that means: a handful of Russians staged massive artworks comparing the leader of the free world to a monkey.

Apparently annoyed with how the Obama administration has handled the Ukraine crisis, the Moscow Times reported, several students mounted an offensive banner so that it faced the U.S. embassy. Printed on images of Obama in the poses of the “Three Wise Monkeys,” according to the Washington Post, is text that translates as: “Don’t see. Don’t hear. Truth for no one.”

Across from the US embassy in Moscow today, Russians hung this racist banner addressing Obama on his 53rd birthday. pic.twitter.com/wqhX9ILE8W

That poster was a masterstroke of subtlety compared to the efforts of a “political art group called the Moscow Student Initiative,” which successfully projected a laser animation onto the U.S. embassy itself. It depicted Obama eating or (more likely) fellating an unpeeled banana.

The media have pointed out that Russians’ proclivity for loathsome racial humor is nothing new. Even so, you might imagine that these incidents point to rapidly deteriorating Russo-American relations—except that some birthers and Tea Partiers have a newfound respect for the snowy one-time superpower: “Why is Russia quickly going up on my top 10 countries list?﻿” asked one duly impressed YouTube commenter. “Because you’re a fascist,” another replied.

“Why don’t you move to Russia let’s see how you like it there,” a third suggested, inadvertently pitching the greatest reality show ever. Someone call Bravo’s development team, like, now.