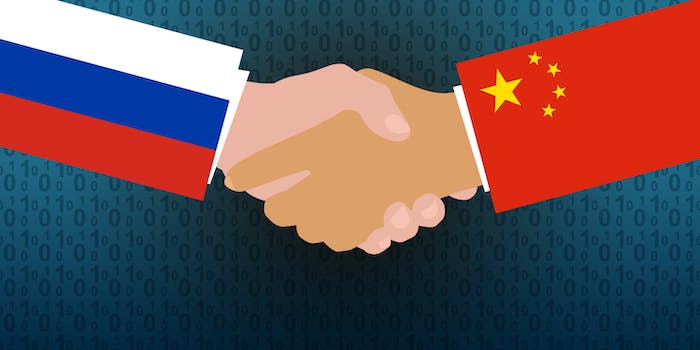 Russia and China promise not to hack each other

On Friday, China and Russia signed a cybersecurity deal in which they agreed not to conduct cyberattacks against one another.

According to a Wall Street Journal report, the two countries also agreed to “jointly counteract technology that may ‘destabilize the internal political and socio-economic atmosphere,’ ‘disturb public order,’ or ‘interfere with the internal affairs of the state.’”

The two countries share an approach to the Web that could charitably be described as skeptical. China’s “Great Firewall” has set the standard for censorship, control, and limitation of free speech online.

Russia shares China’s prioritization of order over liberty and attracted a lot of attention in the last few years for its anti-gay laws that make even mentioning homosexuality online a crime and in general operates an extensive online filtering regimen.

Additionally, sanctions against Russia’s takeover of Crimea and military actions elsewhere in the Ukraine, as well as providing whistleblower Edward Snowden with a safe haven, have inspired a chillier relationship with the U.S. and other Western countries, perhaps contributing to its decision to seek closer ties to China.

Russia and the U.S. first signed a “cyber non-aggression pact” in 2013.

The China agreement “will be a more profound [agreement] than the one we have with the Americans,” a knowledgeable Russian government official told the Kommersant newspaper, according to the Russian news agency Interfax.

Both Russia and China have publically aired fears of U.S. control of the Internet. Russia has announced the development of a plan for the eventuality that outside forces cut Russia’s connection to the global Internet.

China has announced its intent to update its national security laws to make hacking and cyberattacks against the state illegal. One wonders how such a change would affect the Red Army’s Unit 61398 hacking group, which the U.S. Department of Justice last year charged with cyber-espionage.

Skeptics might be forgiven for believing that two of the most cyber-active countries on the planet agreeing not to use a weapon they’ve both invested significant capital in is analogous to a lion-hyena non-aggression pact.

As one Reddit commenter proclaimed, “Trust, but verify Apache logs,” which could show whether the countries are upholding their ends of the bargain.

The two countries plan to sign the agreement by the middle of the year, according to Interfax.