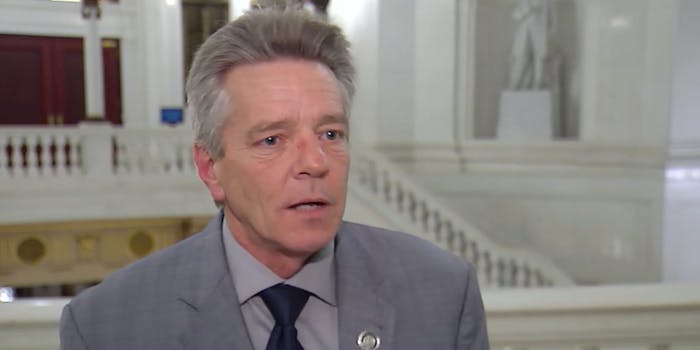 There's a reason his statement sounded so absurd.

Pennsylvania State Rep. Russ Diamond issued a controversial statement scolding people online for “hateful comments towards [the] unmasked community” in what appears to be a mockery of a recent statement against transphobia.

As the coronavirus crisis continues throughout the United States, there has been a rise in videos shaming people for refusing to wear masks despite the overwhelming evidence that masks help contain the spread of COVID-19. These anti-maskers claim that it’s their “right” not to wear a mask, and now Diamond is all but equating their public shamings to a hate crime.

The legislator shared a statement to his Twitter account on Wednesday morning, first saying that he wanted to address “multiple incidents of harassment and specifically hate and intolerance directed at me that have not necessarily been reported in the press.”

He quickly turned to pointing fingers at people on social media, accusing this vague group of people of “hurting the thousands of unmasked Pennsylvanians” every time they chide Diamond for his own refusal to wear a mask.

“Your actions perpetuate a spirit of intolerance and discrimination against unmasked individuals and specifically individuals like myself who are outspoken about it,” he wrote.

Diamond is well known for his anti-mask stance, previously making headlines for comparing mask-wearing to child abuse and for being among those called out by fellow Rep. Brian Sims for quarantining after potentially being exposed to COVID-19 but not telling any Democrats who shared the same space.

So, it’s likely he actually believes the gist of what he’s putting down in this absurd statement that many are taking at face value, but as bad as that is, there’s an added layer to it.

On Tuesday, Pennsylvania Health Department Secretary Dr. Rachel Levine, who is a transgender woman, opened her daily coronavirus briefing with a speech denouncing transphobia in the state.

And Diamond’s statement almost word-for-word mimics Levine’s speech, only replacing mentions of the trans community—a genuinely marginalized group that is far too often the target of true hate crimes and intolerance—with pleas for sympathy for anti-maskers.

Dr. Levine has not yet responded publicly to Diamond’s statement.