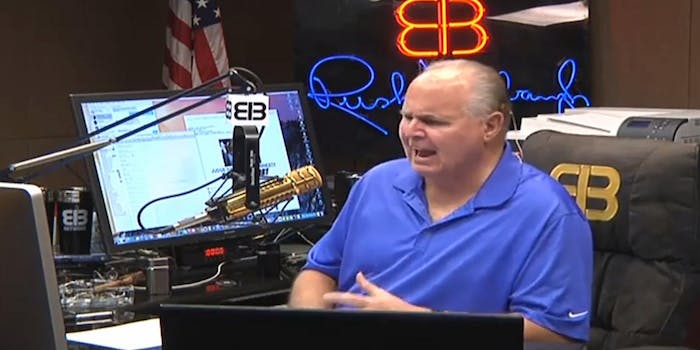 It was only a matter of time before he started spewing words.

Rush Limbaugh is at it again. The conservative radio host surely seethed with indignation as he watched every decent-minded human being around him express outrage at a video of fraternity brothers chanting racist lyrics. On Wednesday, he finally spoke up.

The problem wasn’t the words that the Sigma Alpha Epsilon (SAE) brothers were chanting, Limbaugh claims. It was the fact that these University of Oklahoma students were white—which sounds reasonable until you hear what he actually said.

In Limbaugh’s mind, Kanye West could get away with similarly vile stuff, so critics of SAE are being hypocritical.

“If this had been a song by Kim Kardashian’s husband, and then sung this song at the Grammys, it’d be a hit,” Limbaugh said on his radio show, The Rush Limbaugh Show.

What he did not point out, of course, is the glaring difference between white frat guys using the N-word in a chant that celebrates discrimination and black musicians repurposing the word for themselves.

Limbaugh has made no secret of his disdain for musical genres like rap and hip-hop. While he hasn’t yet resorted to outright racist mockery of West and other black performers, as he once did with the president of China, it may only be a matter of time.

“This stuff gets awards,” Limbaugh said, “and the people that sing it are portrayed as American royalty in terms of celebrity. You can’t deny that.”