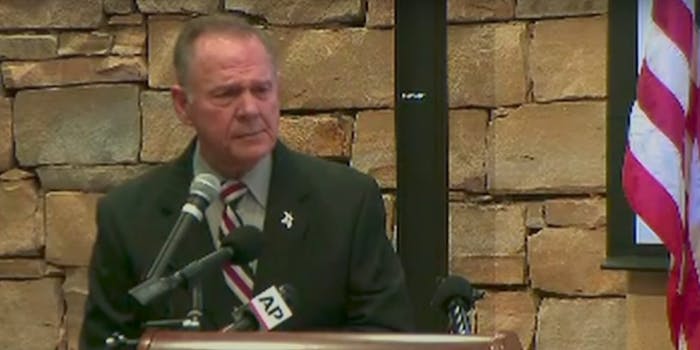 Screengrab via Right Side Broadcasting Network

The Senate candidate faces reports that he sexually assaulted a 14-year-old.

Kayla Moore, the wife of Republican Alabama Senate candidate Roy Moore, shared a letter to Facebook on Sunday that indicated support from more than 50 Alabama pastors.

Moore has been at the center of controversy since Friday when the Washington Post broke a story that the former judge reportedly dated teenagers when he was in his 30s. One woman says Moore sexually assaulted her when she was 14. A fifth woman accused him of sexual misconduct on Monday, according to the New York Times.

On Monday, the New Yorker added to Moore’s growing list of charges with a report that he was banned from a mall in Gadsden, Alabama, because he “badgered” teen girls. According to the report, many locals including lawyers and cops had heard about the banning.

Moore denies the women’s accounts of assault. He has not commented on the mall story.

The letter bearing the pastors’ names describes Moore as an “immovable rock in the culture wars” who has faced adversaries with “rare, unconquerable resolve.” It urges readers to “join us at the polls to cast your vote for Roy Moore.”

Despite the list of 53 signatures, at least one of the pastors did not grant permission for their name to be included, AL.com reported.

According to AL.com, “Tijuanna Adetunji of the Fresh Anointing House of Worship in Montgomery, said she was not contacted about the letter and did not give permission for her name to be used.”

“I was not asked about this story or allegations,” Adetunji told AL.com.

Read the full text of the letter and its signatures here.