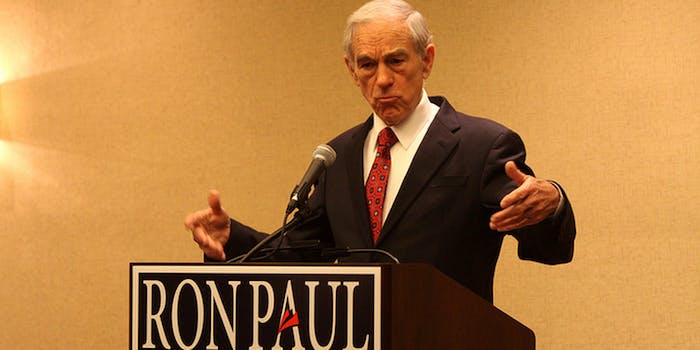 The Libertarian's attempts to reclaim two websites devoted to his political ideals backfired.

Ron Paul’s petition to the World Intellectual Property Organization (WIPO) to take over RonPaul.com from a group of liberty-loving supporters has failed in spectacular fashion.

In 2008, a group of Paul fans joined together and created RonPaul.com, a website devoted to Paul’s libertarian political ideology. When Paul asked for the domain name, the owners came back with an offer of $250,000.00 or the rights to additional site, RonPaul.org, for free.

Paul fought back and filed a complaint with WIPO, an agency of the United Nations (an organization he has often criticized and even tried to defund).

The panel found the current owners of the domain have the right to maintain the website because Paul had not trademarked his name. They also found that “expressing support and devotion to Ron Paul’s political ideals” gives the owners a “legitimate interest” in owning the domain name. And the owners were not acting in “bad faith” by claiming the name.

He was found to be guilty of “reverse domain name hijacking.” The ruling shows that the owners of RonPaul.com offered to give Paul RonPaul.org free of charge, but after this offer Paul filed his complaint for both domain names.

“While the ruling is disappointing, Dr. Paul is excited to launch his new personal website on another domain in the coming weeks,” said Megan Stiles, a spokesperson for Paul.

Check out the entire decision here.