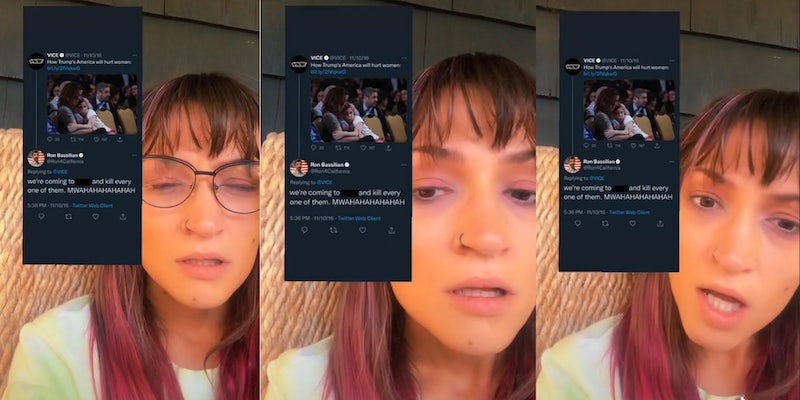 Republican’s threat to ‘rape and kill’ women resurfaces on TikTok

The failed congressional candidate appears to be defending his remarks on Twitter.

A TikTok video this week has resurfaced an old tweet from a former Republican candidate who joked about raping and killing women.

Highlighted on Tuesday by a TikTok user known as Jillian, the video showcases a 2016 remark from Ron Bassilian, a verified Twitter user who ran for California’s 37th Congressional district in 2018. The TikTok mistakenly says Basilian is running in the California recall election. He is not, but is currently involved with a political action committee known as “Protect Culver City,” which is devoted to opposing the local city council.

The comment came in response to an article from VICE that argued “Trump’s America will hurt women.”

“[W]e’re coming to rape and kill every one of them,” Bassilian said. “MWAHAHAHAHAHAH.”

TikTok users responded with shock to the brazen tweet and criticized the failed candidate’s comments.

“Imagine thinking the suffering of raped women is funny and joking about it,” one user wrote.

Bassilian was later confronted on Twitter with screenshots of the tweet and appeared to stand his ground.

TikTok users struggled to believe that the tweet was real. Jillian followed up with a second TikTok video highlighting another remark allegedly made by Bassilian.

The second tweet purportedly shows Bassilian stating in 2014 that he was worried he’d “see a headscarf-wearing cunt” and “bash her head into the pavement.”

The Daily Dot reached out to Bassilian to inquire about his Twitter history but did not receive a reply by press time.