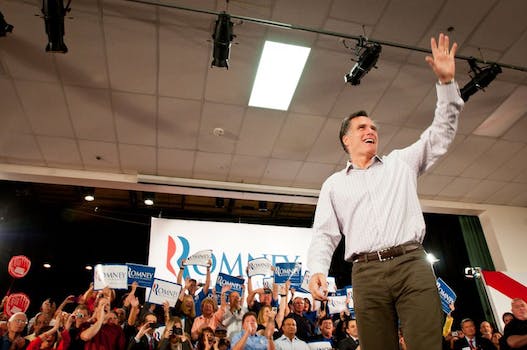 The Republican presidential candidate's Twitter following spiked by more than 100,000 in a single day, but his campaign denies paying for followers.

Republican presidential candidate Mitt Romney saw a drastic and sudden spike in Twitter followers starting on Friday evening and by midday Saturday the presumptive nominee had gained more than 100,000 new fans. The sudden surge had many on Twitter claiming that Romney was buying fans in a desperate attempt to catch up to President Barack Obama.

But Zach Green of the invaluable 140elect.com said it may not be what it seems. In Green’s opinion, it’s actually someone buying followers for Romney as a way to create a negative story that the campaign is desperate for fans.

“It’s too obvious and sudden,” Green told the Daily Dot.

Data Green gathered on Saturday showed that since 5 p.m. Friday, Romney has gained more than 100,000 new fans – 23,000 on July 20 and more than 75,000 on July 21. On a normal day this summer, Romney has gained anywhere from 3,000 to 4,000 new followers. Green also pointed out that even though the number of followers has increased, mentions of Romney on Twitter have remained the same.

Looking at some of Romney’s new followers, it is obvious that the accounts are fake – many only follow a few people and some have never tweeted.

Shortly after the sudden spike in followers began on Friday, many Twitter users noticed and some started using #MoreFakeMitt. According to Topsy.com, the hashtag had been used more than 6,000 times in less than 24 hours.

“Mitt Romney told his campaign to “buy some flowers” and they misheard him,” wrote Hesiod Theogeny.

This is not the first time a Republican has been accused of buying followers. In August of last year, a series of news outlets reported that almost 80 percent of Newt Gingrich’s followers were fake. At first some said it was a bogus report meant to harm the then-presidential candidate, but digital analysis company PeekYou said data showed that only 8 percent of the followers were real, live people. The initial report had supposedly come from a dissatisfied former Gingrich staffer. The campaign later denied it was buying followers and told the National Review the story was “a false accusation which will hurt the feelings of 1.3 million people. #rude.”

How the controversy will play out for Romney is unknown at this time, but Green stands by the idea that someone else was buying the fans in hopes of making the Republican look bad, although he’s not sure what company or group would have control of more than 100,000 Twitter accounts.

“They want to embarrass him,” Green wrote.

Romney’s campaign has denied paying for followers, and has “reach[ed] out to Twitter” to investigate the sudden spike.