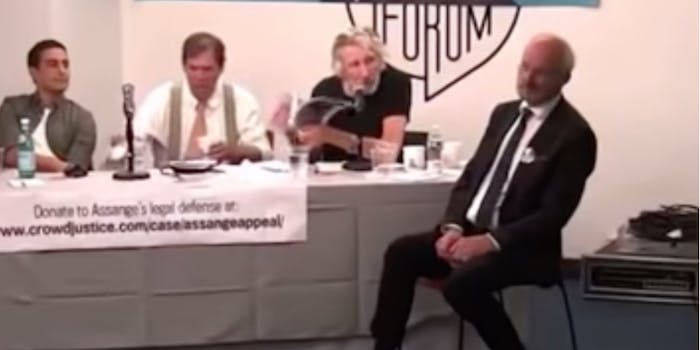 ‘F*ck you. No f*cking way’: Roger Waters shuts down ‘idiot’ Mark Zuckerberg after he asks to use Pink Floyd song (updated)

Update 2:45pm CT, June 15: A Facebook spokesperson denied to the Daily Dot that Zuckerberg was personally involved with the request Waters received.

Original report: Roger Waters is not mincing words when it comes to whether Mark Zuckerberg can use the Pink Floyd track “Another Brick in the Wall” in a film intended to promote Instagram.

The answer isn’t just no—it’s “no f*cking way,” according to a video of Waters discussing the Facebook CEO’s request at The People’s Forum.

“It’s a request for the rights to use my song, ‘Another Brick in the Wall’ to— in the making of a film—to promote Instagram,” Waters said. “It’s a missive from Mark Zuckerberg to me. Arrived this morning. With an offer of a huge, huge amount of money. And the answer is, ‘F*ck you. No f*cking way.”

The response reportedly came during a reception held by The People’s Forum to support WikiLeaks founder Julian Assange, who is still imprisoned after leaking information about the U.S. Army provided by Chelsea Manning.

“I only mention that because it’s the insidious movement to take over absolutely everything,” Waters said. “Those of us who do have any power, and I do a little bit, in terms of the control of publishing of my songs anyway, I will not be a party to this bullshit, Zuckerberg.”

Waters read from the message he said he received directly from Zuckerberg.

“‘We want to thank you for considering this project,'” Waters read. “‘We feel that the core sentiment of this song is still so prevalent and necessary today, which speaks to how timely a work it— and yet they want to use it to make Facebook and Instagram even bigger and more powerful than it already is, so that it can continue to censor all of us in this room and prevent the story about Julian Assange getting out to the general public, so the general public can go ‘what? No. No more. Nada mas.'”

After sharing the content of the message, Waters questioned how Zuckerberg got to where he is after creating a site used to rate the appearances of his female classmates at Harvard.

“Zuckerberg features in my new rock and roll show, I’ve got him sitting— no, I shouldn’t tell you, but he does. But you say, how did this little prick who started off by saying ‘she’s pretty, give her a four out of five. She’s ugly, we’ll give her a one,’ how the f*ck did he get any power in anything?”

The Daily Dot has reached out to both Waters and Zuckerberg.