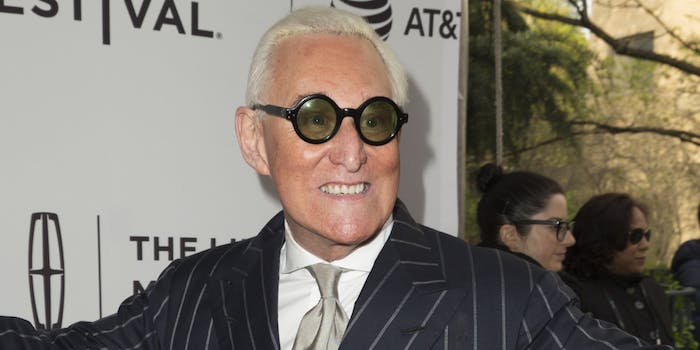 Morris W. O’Kelly and the former campaign adviser to President Donald Trump were debating Stone’s federal conviction and if he received special treatment from Trump, who on July 10 commuted Stone’s sentence.

“There are thousands of people treated unfairly (in the justice system) daily. Hell, your number just happened to come up in the lottery. I’m guessing it was more than just luck, Roger, right?” O’Kelly said, referring to Stone’s commutation.

The interview took place via phone and was live-streamed on O’Kelly’s Los Angeles show, The Mr. Mo’Kelly Show.

“I don’t really feel like arguing with this n*gr*,” Stone muttered.

It is unclear if Stone knew O’Kelly could hear him as he seemingly tried to muffle or step away from the phone.

Stone then gaslighted O’Kelly by denying the claim.

O’Kelly continued the interview, but he later tweeted, “I’m nobody’s N*GR*.” In his tweet, he included a short blog post that touched on the incident along with the audio from the show.

“The audio is, what it is. Stone could have reached for any pejorative, but unfortunately went there,” O’Kelly wrote in the blog. “He denies saying it…but the audio is, what it is. At the end of it all, despite never having introduced race into the conversation, ever…Stone offered an unfiltered, unvarnished one-sentence expression of how he saw the journalist interviewing him.”

“He didn’t see me as a journalist, not as a professional, not a radio host…but a ‘N*gr*’ first and foremost. Thirty years as an entertainment professional, twenty of them in radio. ‘N*gr*’ was the first pejorative uttered. The low-calorie version of the N-Word,” he continued.

Before Stone’s commutation, he was slated for 40 months in prison for witness tampering and making false statements to Congress regarding Russia’s influence in the 2016 election.