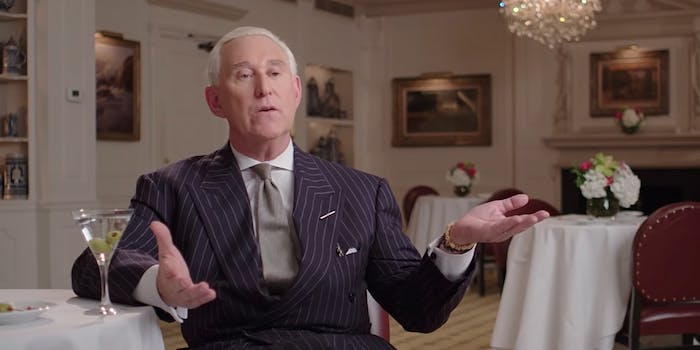 On Tuesday, Roger Stone was barred from posting on all social media platforms–including Instagram, Twitter, and Facebook–after refusing to respect a federal judge’s gag order regarding his social media use.

In February, U.S. District Court Judge Amy Berman Jackson barred Stone, who is currently facing charges for lying in the Russia investigation, from posting about his case after he published a photo of the judge with what appeared to be a crosshairs symbol.

That first gag order still gave the longtime President Donald Trump associate the right to proclaim his innocence online and fundraise for his legal fees. Instead of respecting the order, Stone went on social media to mock the trial and give his followers subtle insights into the case in various problematic posts that were reviewed by the judge.

Jackson could have revoked Stone’s bail, put him in jail pending trial, or held him in contempt of court. The judge decided against taking those drastic measures and instead issued the social media ban, which will last for the entirety of his criminal case.

Stone’s defense lawyer unsuccessfully argued that even though his client was posting about the case, his posts could not impact the case.

Stone has been charged with witness tampering and lying to congressional lawmakers. He has pleaded not guilty.