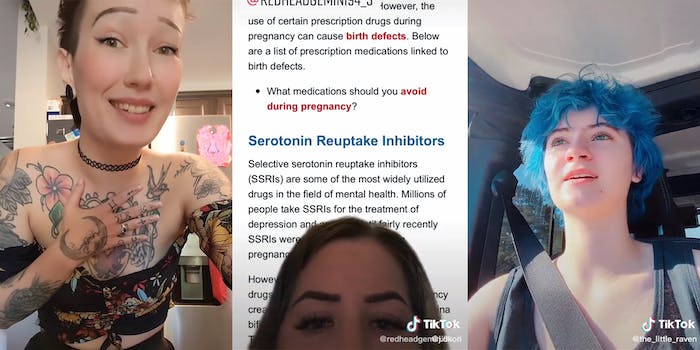 The Supreme Court’s overturning of Roe v. Wade and the subsequent trigger laws that have re-criminalized abortion in certain states may have a number of unexpected consequences that go well beyond a right to choose.

TikTokers are trying to raise awareness of the number of potential drugs that could be outlawed or banned thanks to overreaching, uninformed right-wing state legislatures.

A significant amount of anti-abortion legislation either intentionally or negligently criminalizes medical care either unrelated to abortion or which is medically necessary.

In the wake of the decision overturning Roe, people online have noted that women could be prosecuted for ectopic pregnancies. One TikToker said, in the wake of the ruling, a doctor was consulting with a lawyer before performing a life-saving procedure.

These restrictions placed on necessary medical care by some anti-abortion legislation could even be extended to patients who aren’t actually pregnant.

Laws banning the administration of drugs that cause miscarriage, while intended to outlaw abortion that is induced chemically rather than surgically, could also be applied to other medications where there is a risk of miscarriage or severe fetal defects, regardless of if the medication is necessary for keeping the pregnant person alive.

Even where a patient is not pregnant nor intending to, the risk of them becoming pregnant and suffering a miscarriage as a result could potentially be enough for both patient and prescriber to suffer legal consequences.

Commonplace medication like benzodiazepines have been flagged by TikTokers as something that could one day be outlawed and demonized as abortion pills.

After Texas’ most recent set of abortion restrictions, prior to the overturning of Roe, pharmacists refused to dispense medication for treatment of ectopic pregnancy, even though the law did in fact make exceptions for those cases. Similarly, the aggressive prosecutions of those who’ve suffered stillbirths and miscarriages in the parts of America that already had restrictive abortion laws demonstrate a precedent for how patients who find themselves pregnant while taking certain medications could be forced to stop taking them or prosecuted for doing so.

Whether or not prosecution is likely, patients are expressing their concerns about the lack of access and potential criminalization of medications.

At least one person, @the_little_raven, went on TikTok to recount how her doctor already wanted to withdraw and stop prescribing the medication she takes for a heart condition, despite the lack of suitable alternatives and no intent to become pregnant on her part, because of the overturning of Roe vs. Wade and new abortion restrictions in her state.

@the_little_raven did not specify what state she was in.

Though the TikToker said she has managed to find an alternative source for her medication since posting the video, it shows a potential world were any medication could be banned.

The Daily Dot has contacted @the_little_raven and will update the article if they respond.