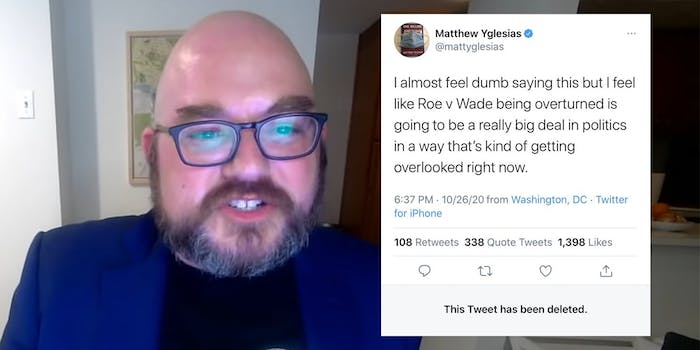 Political blogger roasted for tweeting Roe v. Wade is ‘kind of getting overlooked’

'No one talking about Roe v Wade, says the guy inexplicably still paid to talk about politics.'

At least that way you could write—or even tweet—thoughts and ideas that resonate with the world at large, the one you are tasked with covering.

But let’s be real, what fun would that be? If that were the case, we wouldn’t get the wonderful musing of Vox’s Matt Yglesias, the most obtuse insider on the internet.

Last night, the Senate voted to confirm Amy Coney Barrett to the Supreme Court, a move that people have been shouting from both real and virtual rooftops will be devastating to a woman’s right to choose to have an abortion.

In the month since Barrett was nominated, countless pieces have been written about how a 6-3 conservative bent on the Court will work to dismantle Roe v. Wade, the landmark case that granted women the right to choose to have an abortion. Immediately after the vote, a number of people pointed out that Barrett will now be able to hear a Mississippi case about the state’s 15-week abortion ban, perhaps the first step in completely overturning Roe.

Which makes it all the more baffling that Yglesias would offer this opinion:

“I almost feel dumb saying this but I feel like Roe v Wade being overturned is going to be a really big deal in politics in a way that’s kind of getting overlooked right now,” Ygelsias wrote on Twitter.

There is some possible semblance of truth in that, given that Democrats’ strategy in the Senate was to focus almost exclusively on the Affordable Care Act, a strategy that … did not work. But outside of that little bubble, every single person who believed in abortion rights was screaming about it, and for a so-called political insider to somehow miss that baffled the internet.

“Guys roe v wade getting overturned might be bad, but at least Matt yglesias preserves his right to have the most shit takes of all time,” @barffknsimpson tweeted.

“No one talking about Roe v Wade, says the guy inexplicably still paid to talk about politics,” @actioncookbook chimed in.

Erin Biba nailed it: “This is a truly remarkable tweet. The only way you could come to the conclusion that it’s being overlooked would be if you had never in your life listened to women.”

Yglesias deleted his tweet, probably because no one was overlooking it right then.