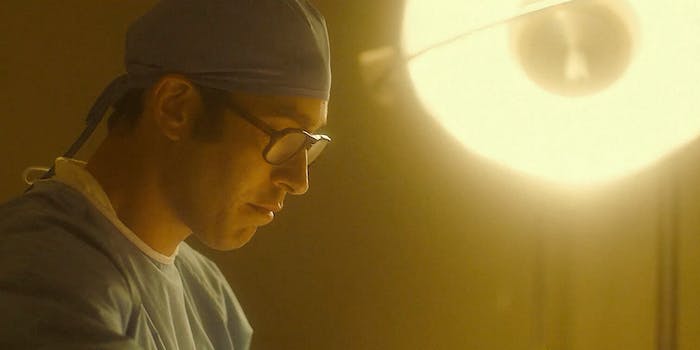 It's one-sided, misogynistic, and parts are blatantly false.

The little-anticipated film Roe v. Wade is what happens when people convince themselves that opinions and money are sufficient substitutes for plot, narrative, and character development. It’s the cinematic version of right-wing red meat, a propaganda piece that fails at both its ostensible purpose—to entertain—and its real one—to convince.

The story is difficult to follow, leaping as it does back and forth between dates and perspectives. The point is nevertheless clear: abortion is bad, women who terminate pregnancies are wicked and selfish, and the most important thing to consider in the abortion debate is how men feel about it.

But it’s out now, available to buy now Google Play, if you want.

That the story about the legalization of abortion is presented through a man’s point of view tells you everything you need to know about this movie. Most of the cast is male, and the narrative focuses on men as it follows Dr. Nathanson’s journey from a bumbling reproductive freedom advocate to callous abortionist who proudly wears the moniker of “the Scraper” to staunch opponent of abortion. Misogynism runs rampant throughout Roe v. Wade. The female characters are poorly developed and largely presented as stupid, naïve, and evil.

The writers didn’t give them much to work with, but the acting is passable, save for several ridiculous scenes featuring old men getting terribly upset about abortion, shouting, fighting, even weeping. Loeb’s Dr. Nathanson is an exception, as he spends much of the film oscillating between emotionless nitwit and emotionless villain. In the opening scene, he describes an aborted fetus as “blood and meat” and “a lifeless limp thing lying there” that solicits no feelings from him.

This movie is based on a true story in the sense that Roe v. Wade was indeed the Supreme Court case that legalized abortion, its characters are real people, and Dr. Nathanson wrote a book about his transformation from pro- to anti-choice. It’s deeply one-sided and some parts are clearly the writers’ invention, such as dialogue between Supreme Court justices and their families. Others are blatantly false.

In one utterly unbelievable scene, police burst into a luxury hotel room to bust an illegal abortion operation, punch out a doctor performing one, then make the grisly discovery of open buckets of bloody fetuses that look to have been carried well into the second or even third trimester. In another, Dr. Nathanson, his co-conspirator, and their spouses do a merry singalong of a song about abortion, the lyrics to which do appear in his 1979 book, Aborting America: “There’s a fortune in abortion/Just a twist of the wrist and you’re through.”

Nevertheless, right-wing publications have praised its historical accuracy. Red State declared that it “brings facts on the abortion ruling not formerly in evidence.” It is also accurate to say it creates facts.

It frames Jane Roe’s attorneys, Linda Coffee and Sarah Weddington (played by Justine Wachsberger and Greer Grammer, respectively), as pawns of reproductive freedom advocates. “Sarah and Linda couldn’t get hired anywhere else,” one of their male manipulators declares. Neither is true.

Coffee scored the second-highest on the Texas bar exam and had previously written a brief successfully challenging the state’s anti-homosexuality sodomy laws. She spearheaded Roe v. Wade. Weddington graduated at the top of her class and later served three terms in the Texas legislature.

Roe v. Wade the movie gets much else wrong, seemingly relying as it does on the self-serving autobiography by the now-deceased Dr. Nathanson, anti-choice propaganda, fantasy, and a few historical snippets. Its presentation of constitutional and common law is unforgivably bad. It neglects to mention very real data about the number of women and girls who died as a result of complications from illegal abortions, instead asserting that Dr. Nathanson and company invented their own statistics.

In spite of its many deficiencies as a film, Roe v. Wade will find an eager audience among people who oppose abortion, such as the attendees of the Conservative Political Action Conference where it debuted. It’s easy to imagine it being required viewing in evangelical schools, where teens will suppress snickers when the camera pans to a dismembered “fetus” that bears an uncanny resemblance to the wax voodoo doll in The Witches of Eastwick. They must’ve run out of the $8 million Loeb told the Sun-Sentinel the movie cost prior to shooting this scene.

Roe v. Wade is the product of arrogance, and opposition to reproductive freedom. It’s impossible not to hate-watch it. In fact, it’s designed to be hate-watched. It fails in many regards, but in this one, the film is a smashing success.