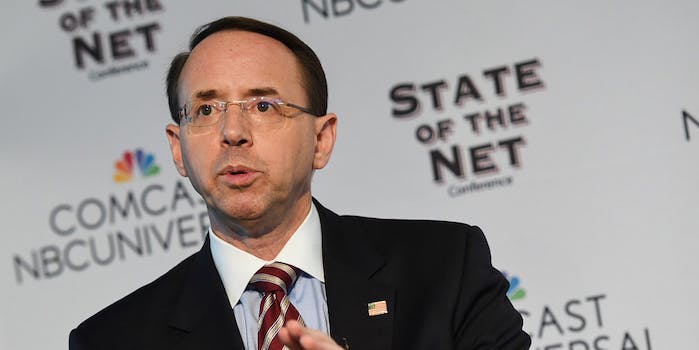 The future of Mueller's investigation is now up in the air.

“At the request of Deputy Attorney General Rod Rosenstein, he and President Trump had an extended conversation to discuss the recent news stories. Because the President is at the United Nations General Assembly and has a full schedule with leaders from around the world, they will meet on Thursday when the President returns to Washington, D.C.”

Deputy Attorney General Rod Rosenstein, a repeated fixation of President Donald Trump, is expected to leave his position on Monday.

Axios first reported that Rosenstein had “verbally resigned” to Chief of Staff John Kelly, however it appears that Rosenstein expected to be fired when he was summoned to the White House on Monday morning.

This is bonkers: Pete Williams is reporting that White House is saying Rosenstein will resign. Meanwhile, Justice Department saying that he will not resign.

The debate over whether he’s been fired or resign could affect just how Rosenstein is replaced, especially with regard to oversight of Special Counsel Robert Mueller’s Russia probe.

Whether or not the deputy attorney general resigned or was fired could have major implications. As Politico reported after Veterans Affairs Secretary David Shulkin left office, the Federal Vacancies Reform Act could only allow Trump to name a replacement for Rosenstein only if he resigns.

Rosenstein’s current state of flux brought about the same joke across Twitter.

The expected departure of Rosenstein comes just days after the New York Times reported that the deputy attorney general suggested to FBI and Justice Department officials that Trump be secretly recorded in the aftermath of the firing of former FBI Director James Comey.

The newspaper also reported that Rosenstein floated the idea of invoking the 25th Amendment, a clause in the Constitution that allows the Cabinet to remove a president from office. Rosenstein denied the claims.

Other reports suggested the remarks were made sarcastically.

However, this isn’t the first time it tempers have flared between the president and the deputy attorney general.

In mid-March, NBC News reported that Rosenstein had been telling those close to him that he was preparing to be fired, repeating a phrase from Martin Luther and saying he was confident that he had performed his job in the Department of Justice “with integrity.”

Similarly, in April, the Wall Street Journal reported that the White House had asked allies to attack the former deputy attorney general and others.

Around the same time, White House Press Secretary Sarah Huckabee Sanders said she did not “have any announcements” when asked about the president potentially firing Rosenstein.

In March, the relationship between the former deputy attorney general and the special counsel’s office was magnified when it was revealed Rosenstein had given Mueller the authority to investigate Paul Manafort, Trump’s former campaign chairman, including whether he was “colluding with Russian government officials” during the 2016 election.

The deputy attorney general could be the latest in a number of high-profile officials in law enforcement agencies to be axed or forced out by Trump. Last year, the president abruptly fired Comey, and FBI Deputy Director Andrew McCabe was fired in late March. Even Sessions, an early Trump backer during the campaign, has faced criticism from the president.

While Rosenstein had not faced the same kind of scorn on Twitter as McCabe, he wasn’t completely spared from Trump’s outbursts.

With Rosenstein’s ouster, speculation has begun about the future of Special Counsel Robert Mueller‘s investigation into Russian interference in the 2016 election. Rosenstein had been in charge of the special counsel’s investigation after Attorney General Jeff Sessions recused himself from Russia-related matters.