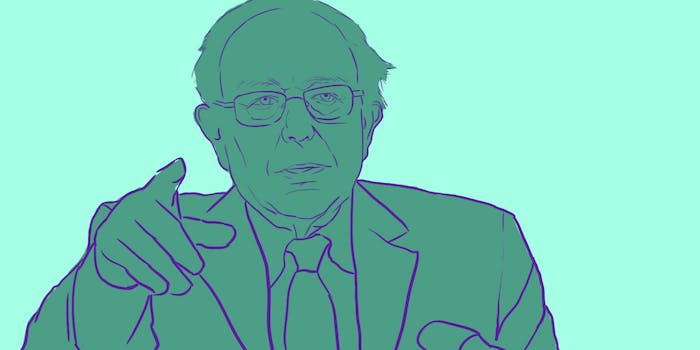 Every election cycle, like clockwork, famous musicians can be found angrily criticizing politicians for using their songs without permission.

When Rowan, Kentucky, County Clerk Kim Davis finished a five-night stint in the clink for refusing to issue marriage licenses to same-sex couples, she walked on stage at a rally with Texas Senator Ted Cruz and former Arkansas Governor Mike Huckabee to Survivor’s “Eye of the Tiger.” Survivor guitarist Frankie Sullivan was, unsurprisingly, less than thrilled at the appropriation and is reportedly mulling a lawsuit.

Musicians getting testy about politicos using their tunes doesn’t typically cross the aisle. It’s almost always liberal performers taking umbrage at conservative politicians. This is because, aside from Ted Nugent, musicians are socialist hippies—this an essential element of the creative process. It’s science (probably).

Lucky for them, in the 2016 presidential election cycle, there is a candidate in the race who is literally a socialist hippie.

On Friday, Vermont Senator Bernie Sanders, who is challenging former Secretary of State Hillary Clinton for the Democratic nomination, unveiled a list of 128 celebrity supporters.

While the list contained notable names like Apple co-founder Steve Wozniak, actor Danny DeVito, and comedian Patton Oswalt, it’s absolutely packed with musicians. Sanders could spend the entirety of his campaign exclusively using material from his avowed supporters and and still have songs to spare.

The Daily Dot put together a Spotify playlist of tracks from musicians endorsing Sanders’s increasingly less quixotic quest for the Oval Office.

The playlist has a song for pretty much every occasion.

Actually winning the New Hampshire primary? “Damn It Feels Good to Be a Gangsta” by the Geto Boys.

A whistle-stop tour through North Africa to show his foreign policy bona fides? “Marakesh Express” by Crosby, Stills, and Nash.

Bernie’s got songs for days. Can Jeb Bush say the same? Probably not. Well, maybe a little: