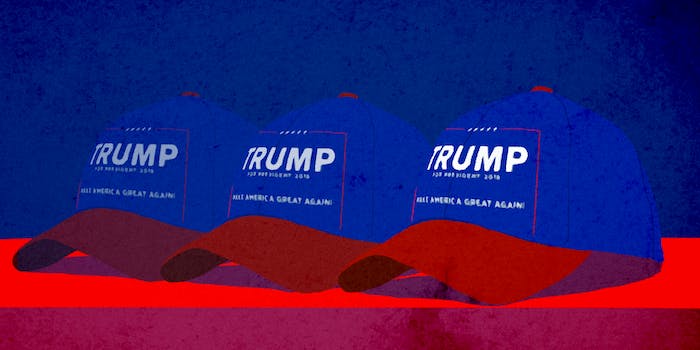 For the RNC’s swag merchants, politics is second to profit

Joe Nestor was born into the T-shirt game.

As a kid, Nestor tagged along when his parents would set up a tables and hock merchandise at circuses, parades, and Mardi Gras celebrations. “It’s in my blood,” he says, a black goatee poking out from under the bright red “Make America Great Again” baseball cap slung low over his tanned face. “I’ve been doing it all my life. I always keep it in mind when I need the extra cash.”

On Monday, Nestor was in Cleveland, a short drive away from his home in a Cleveland suburb. He set up a stand on the sidewalk in front of a parking lot a few blocks from where the Republican Party was holding its quadrennial convention at the Quicken Loans Area. As presumptive Republican nominee Donald Trump, one of America’s greatest self-proclaimed businessmen, was gearing up to accept the GOP presidential nomination, Nestor was on his own hustle.

Nestor’s day job is in construction, and he’s taken a couple weeks off work to sell shirts outside the convention. For the past six months, he’s done a lot of Trump rallies, but took a respite from politics to sell Cleveland Cavaliers merch as his hometown team battled its way to its first NBA championship in over half a century.

His biggest seller at Trump rallies are “Hillary For Prison” shirts and buttons. Actually, he notes, pretty much any buttons tend to sell pretty well. His menagerie of buttons are pinned to a sheet of bright orange cardboard. One reads “Bomb the hell out of ISIS” superimposed on the image of a massive explosion. Another says “Orlando Strong” above a ribbon that intermingles the rainbow pride flag with the American stars and stripes.

For all the stridency of his wares, Nestor is apolitical. “I’m neutral,” he says with a shrug. “I do both Hillary Clinton and Trump events, so I stay neutral to the political process.”

Among many of the dozens of people selling pro-Trump shirts, buttons, and flags around the edges of the RNC, Nestor’s neutrality was a common refrain. With rare exceptions, their motivation was purely monetary rather than expressly political. Within that kind of mercenary frame, the idealistic belief that American capitalism is based on the simple idea of giving the people exactly what they want is a sort of beauty. It’s the sense that, even in this intensely polarized age, where the country seems to be pulling apart along racial and economic lines, there’s something comforting in the idea that people of all political stripes can put their differences aside and try to make enough scratch to simply get by.

That’s not to say that many of the ideologies expressed on the gear sold on the streets of Cleveland this week aren’t deeply pernicious. Take, for example, the “Bomb the hell out of ISIS” button. It’s not an uncommon sentiment among Americans. Yet, from the perspective of the innocent Syrians and Iraqis forced to live under the repressive heel of the Islamic State, the type of carpet bombing advocated by erstwhile 2016 GOP presidential hopeful Sen. Ted Cruz isn’t just counterproductive; it’s downright monstrous.

“The problem in the West is that they see that Raqqa is the capital of ISIS, so they think that all the people of Raqqa are with ISIS,” Mohammed Saleh, the co-founder of an anti-ISIS news site covertly operating out of ISIS’s home base, told the Daily Dot last year. “There are 500,000 civilians living inside the city of Raqqa—it’s a large number of civilians…there are thousands and thousands of innocent civilians that don’t have anything to do with this war or with ISIS.”

Nestor tries to be even-handed, at least when it comes to both sides of the U.S. political spectrum—if only because that’s where the money is. He sold gear for left-leaning audiences when he worked President Barack Obama’s 2008 inauguration, just as he’s done at Clinton events this election cycle. “Whatever puts me to work,” he said, “that’s what I’m going to do.”

He prefers the Trump events, simply due to the money-making opportunity. “About 100,000 people show up [to Trump rallies], but only 20,000 get in. So you have all of those people who can’t get in. Those are your customers.”

Apryl Jones lives about an hour away in Akron, Ohio. She’s sold T-shirts outside of sporting events across the country for years, ever since a family friend brought her into the business. When she traveled to Seattle to sell shirts for Seahawks games, she loved the sense of camaraderie she got talking to the fans.

“It’s always crazy to see how people respond and how passionate they are about things,” she said with a smile, her black braids falling onto a salmon-colored shirt and blue overalls. “If you’re in a state where your team is winning, the people are really passionate about the team. They have all their stories about how they grew up loving them. It just makes you love the team more.”

This convention is her first political event, but the enjoyment she’s gotten from engaging with all the attendees stopping by her booth is the same. Even so, tension wafting through the air in Cleveland has her worried. “In the back of my head, I’m a little concerned about safety. I’m thinking that someone could do a drive-by and shoot me up. I’ve had people already yell crazy stuff like ‘Eff Trump’ or ‘Get out of here,’” she sighed.

For the most part, her interactions have been positive. She likes how the conversations she’s had with Trump supporters have gotten her out of her own personal bubble. “I have my vision of Trump from watching media like TV and newspapers, but when you actually talk to the people who are buying the stuff, you hear how they view him. It makes you get more insight into who he is,” she said.

One conversation with a particularly passionate Trump fan shifted Jones’s perception of the famously divisive candidate. “This one lady came and asked, ‘Are you on the Trump train?’ I’m like, ‘yeah, I follow it.’ She said that he says so many great things. She showed me pictures of other people she met that supported him. She was talking about all these things he was doing for her personally,” Jones recalled. “So, I think, maybe he’s not as bad as they make him seem.”

That’s why Jones likes talking to people. “I wasn’t anti-Trump,” she said. “I don’t really vote for anybody, you know. But just by her saying that, made me lean a little more towards him.”

While the attitudes of convention attendees have rubbed off on Jones, other vendors, peddling ideology along with their T-shirts, are hoping their political views rub off on customers.

Two progressive-minded New Yorkers came to Cleveland to sell T-shirts emblazoned with the candidate’s face, circled with a slash across the center, as part of their anti-Trump movement, No Trump ’16.

Preferring not to use their real names for reasons connected with their full-time professions, the No Trump ’16 guys started the group in March. Since then, they’ve peddled shirts with the No Trump logo in public spaces across New York City like Union Square in Manhattan and Brooklyn’s Prospect Park. Their goal is to render their image iconic—release 1 million iterations of the logo into the world, from shirts to buttons, Facebook profile pictures to bumper stickers and billboards.

Traveling to the RNC is the first time they’ve taken their crusade on the road. In New York, they’ve sold to a mixture of tourists from Europe and Latin America and to native New Yorkers. “They’re African Americans, they’re Hispanics, they’re women,” one of them said. “They’re typical, educated blue state young people.”

That diversity, and their view of Trump positioning himself in opposition to it, is what sits at the core of what animates No Trump ’16. “I think the blatant racism and xenophobia around the idea of building the wall, keeping all Muslims out, denigrating women at every turn. Those tirades are incredibly offensive,” he said, adding he wished Trump had stuck to a job for which he is actually qualified—building golf courses and luxury, high-rise apartments.

“We took a gamble,” he said with a shrug. “We birthed the idea of this in March, before Trump was officially the nominee. We wagered he was most likely going to make it, become the nominee at the convention and then go all the way to November. We put all our chips on that essentially. In that sense, we were rooting for him to become the nominee because we were passionate about conveying our opposition to him out there in the world.”

Cleveland native T. Jones (no relation to Apryl) set up his stall on a busy corner just down the street from the No Trump ’16 folks. He runs a catering business. When a friend said she needed more vendors, he decided to join for the opportunity.

Jones came up with some original designs and shopped them around to a few local print shops, eventually going with the lowest bidder. “I’m mainly selling to people who are going to the convention, but I’ve also sold to some police officers. I ain’t going to tell you which ones,” he said with a laugh, leaning back in his chair as sweat dripped off his brow from the mid-July heat. “But you can probably guess.”

Jones insisted he wasn’t a Trump supporter or detractor. “I’m a capitalist,” he said. “That’s it.”

“This is my city. I was born and raised here,” he charged. “Why should I let you come to my city and not make a dine off of your back when there are billions of dollars running in this city right now [because of the convention]. I didn’t say millions. There’s a billion dollars being spent in this city right now. Why shouldn’t I get my take of it? I was born and raised in the city of Cleveland. That’s my thinking.

“I’m going to get a piece of the pie. That’s the American way,” he added with a smirk. “My name is T. Jones and I approved that message.”