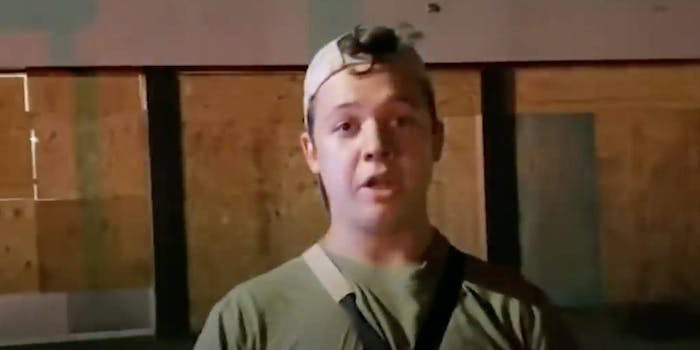 They are attempting to justify the killings.

Organizers supporting 17-year-old Kyle Rittenhouse, who was charged in a double murder, have launched an online campaign to prove his actions were defensible and to smear his alleged victims’ reputations.

Rittenhouse is accused of shooting three people—killing two—with a semi-automatic rifle on Aug. 25, while at a protest in Kenosha, Wisconsin. The large-scale demonstrations centered around the police shooting of Jacob Blake.

The campaign’s intentions are to uncover any criminal wrongdoing by Rittenhouse’s alleged victims—Anthony Huber, 26; Joseph Rosenbaum, 36; and Gaige Grosskreutz, 26, who survived being shot in the arm—in hopes of undermining their victim statuses and eliminating any heroic qualities ascribed to them by those on the left.

People on the far-right are peddling that Huber was a domestic violence offender and rapist; Rosenbaum sexually abused children; Grosskreutz was arrested for multiple crimes, including felony burglary. “Are you really saying the backgrounds of these ‘peaceful protestors’ aren’t relevant to the discussion?” one blog post, which lists these alleged offenses, reads.

A Snopes report, however, found that “aspects of those claims were indeed accurate, while others were outright false.” Snopes broke down which allegations are true, which are not, and which are a mixture, here.

Aso Snopes noted, the victims’ histories were not connected to the protest, and it is also unlikely that Rittenhouse previously knew of their criminal histories.

Some publications are receiving backlash for refusing to cover the criminal records of the three men and Jacob Blake. The Milwaukee Sentinal-Journal recently explained why it wasn’t covering their criminal records.

“There is no evidence so far that the backgrounds of the three victims — Anthony Huber, Joseph Rosenbaum and Gaige Grosskreutz — had anything to do with the clashes that led to the deaths of Huber and Rosenbaum and the wounding of Grosskreutz,” it wrote. “They are the victims of a shooting, and as far as we can tell their past legal records have no bearing on them being shot during a protest.”